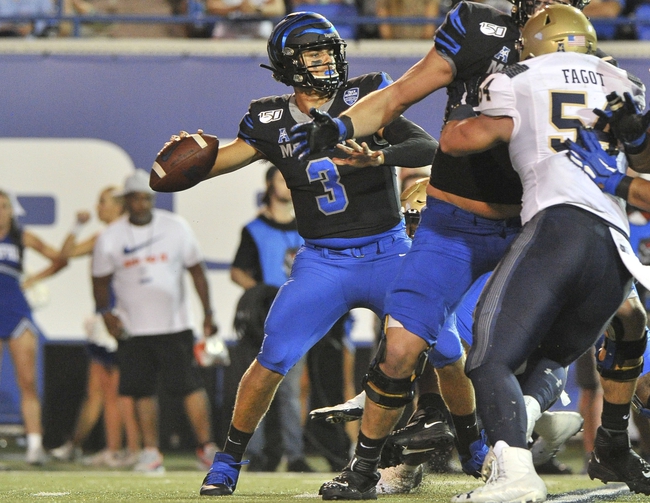 The Memphis Tigers travel to face the Louisiana-Monroe Warhawks on Saturday in college football action at Malone Stadium.

In this non-conference battle between the American Athletic Conference and the Sun Belt Conference, Memphis -- ranked No. 23 in the latest coaches poll -- looks to remain undefeated on the road against 2-2 ULM. After Memphis was able to slip past Ole Miss in week 1, it’s not a surprise that the Tigers are undefeated at this point in the season and bookmakers favor Memphis to go to 5-0 on the season heading into a showdown with defensive standouts Temple.

But no matter how good Temple has looked on defense, Memphis has been even better. The Tigers are ranked No. 16 in FBS allowing just 15.8 points per game, including just 10 points allowed against the SEC’s Ole Miss. The Warhawks have a solid offense to combat Memphis, averaging 443.3 yards per game behind junior running back Josh Johnson who has four touchdowns on 65 carried for 479 yards through four games. ULM has also shown it can score against top opposition with 44 points put up against Florida State.

The difference in the game will come on the other side of the ball, however. ULM has shown the ability to slow down the likes of Grambling and South Alabama, but Florida State scored 45 and Iowa State hung 72 on the board against the Warhawks. Memphis is scoring 44 points per game over its last three games and will look to continue that level of scoring in Louisiana this weekend.

In addition, Memphis is 3-1 against the spread this week with the only loss coming as a 37.5 point favorite against Southern -- a game the Tigers won 55-24. ULM is just 1-3 against the spread and only covered in its overtime loss to Florida State. Both teams have split the total so far this season.

Steer clear of the total. That 64 looks pretty good. But the Warhawks will not be able to slow down Brady White and Memphis and the Tigers should cover fairly easily.