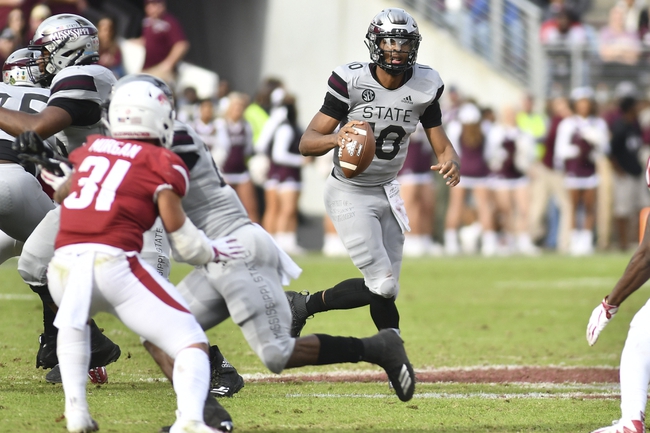 The Mississippi State Bulldogs and the Louisiana Ragin’ Cajuns meet in week 1 non-conference college football action from the Mercedes-Benz Superdome on Saturday afternoon.

The Mississippi State Bulldogs will look to improve on what some would consider a frustrating 2018 campaign, finishing the year with an 8-5 record, including 4-4 in SEC conference play, good enough to earn an invite to the Outback Bowl, where the Bulldogs lost to Iowa by a final score of 27-22. The quarterback position is currently filled with question marks as Keytaon Thompson was expected to be the shoo-in for the starting pivot position despite completing just 47.4% of his passes in three games last season. That was until Penn State transfer Tommy Stevens decided to take his talents to Starkville and play for coach Joe Moorhead, Stevens’ old offensive coordinator for the Nittany Lions. The Bulldogs remain strong on the ground as Kylin Hill and Nick Gibson return with Hill logging 734 yards and 4 rushing scores last season. Stephen Guidry is back to lead the receivers after racking up a team-high 440 receiving yards last season while Osirus Mitchell is back as well after leading Mississippi State with 26 catches last season. On defense, the Bulldogs lost a lot from the defense that led the FBS in yards per play allowed, but Chauncey Rivers and Erroll Thompson will be the more notable pieces in the front seven. Cameron Dantzler and Maurice Smitherman will be the key defenders in the secondary while Marcus Murphy and Jaquarius Landrews will provide some talent as well in the back end. As a team, Mississippi State averaged 397.4 yards of total offense and 28.5 points per game last season. Defensively, Mississippi State led the country in total defense, giving up just 263.2 yards of total offense, including the 2nd fewest rushing yards per game at 95.2 YPG and 2nd in scoring defense, giving up just 13.2 points per game last season.

The Louisiana Ragin’ Cajuns will look to build off of what many would consider an improvement season, finishing with an overall record of 7-7, including 5-3 in Sun Belt conference play, finishing in a tie for the top spot in the Sun Belt West division, but by virtue of their tiebreaker win over Arkansas State, the Cajuns earned a spot in the inaugural Sun Belt championship game, losing out to Appalachian State by a final score of 30-19. The Cajuns received an invite to the Cure Bowl where they lost to fellow Louisiana team Tulane by a final score of 41-24 in the bowl game. Levi Lewis is expected to be under center for the Ragin’ Cajuns to start the year after taking over for the graduated Andre Nunez. Lewis threw for 585 yards, 7 touchdowns and 2 picks last season on 62.7% passing. Trey Ragas and Elijah Mitchell are back to provide one of the nation’s more underrated 1-2 combos in the Ragin’ Cajun backfield, after combining for 2,166 yards and 21 rushing touchdowns last season. The challenge for the Ragin’ Cajuns offense will be replacing four of their top eight receivers from last year’s squad, but Ja’Marcus Bradley is back after leading the team with 608 receiving yards and 10 touchdowns last year and Jarrod Jackson is expected to be a huge deep threat as well. Defensively, there needs to be more from Bennie Higgins and Chauncey Manac on the outside and Tra’Vontae Booker and Zi’Yon Hill inside to stop the run after allowing 219 yards per game on the ground last season. The plus side is that leading tackler Jaques Boudreaux is back after leading Louisiana with 93 tackles last season. As a team, Louisiana averaged 424.4 yards of total offense and 31.9 points per game while allowing 435.9 yards on defense and 34.2 points per game last season.

You’d have to think that Mississippi State would want to use this game as a catapult for bigger and better things that the Bulldogs have planned this season. However, I just think that the Bulldogs have too many question marks on the offensive side of the ball, and while the defense has some serious depth, there’s going to be an adjustment to getting the new guys involved. Louisiana brings back some solid pieces, including both parts of the Ragas-Mitchell running back tandem, and this game is being held in Louisiana, at the Mercedes-Benz Superdome more specifically, so you have to think that these Cajuns will be pumped to be on such a big stage. I’m not saying the Cajuns win this one outright, but they’re more than capable of keeping this one respectable so I’ll take Louisiana and the points in this one.