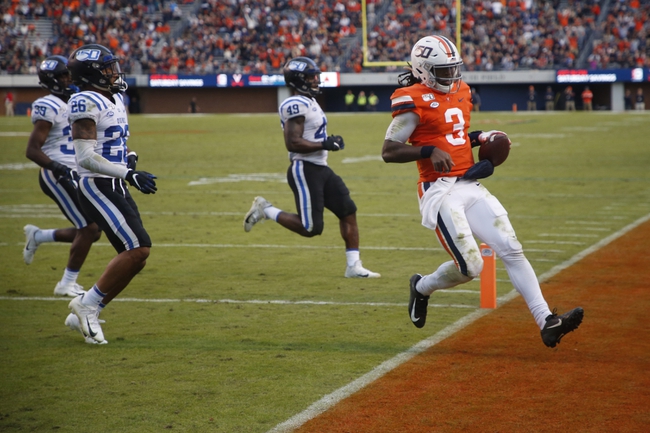 The Virginia Cavaliers visit Cardinal Stadium in Louisville, Kentucky on Saturday to play an ACC showdown with the Louisville Cardinals. The Cavaliers improved to 5-2 on the season following its 48-14 rout over the Duke Blue Devils. UVA lead 17-0 at half and poured it on in the third quarter with 24 points to lead 41-7 to start the fourth. Bryce Perkins had three rushing touchdowns and Wayne Taulapapa rushed for two in the big win over the Blue Devils.

Bryce Perkins leads Virginia with 1,570 yards passing, eight touchdowns and seven interceptions and has rushed for 253 yards and five touchdowns. Wayne Taulapapa leads in rushing with 287 yards and seven touchdowns. Hasise Dubois leads the Cavaliers in receiving with 489 yards and two touchdowns. The leading tackler for Virginia is Joey Blount with 53.

Louisville fell to 4-3 on the season following its 45-10 loss to Clemson. Javian Hawkins scored Louisville’s only touchdown last in the game on a 3-yard run. The Cardinals were outgained by Clemson 551 yards and 263 yards. Hawkins rushed for 129 yards in the loss. Although Louisville lost by 35, the Cardinals hung tough for two quarters including intercepting Trevor Lawrence twice near the goal line.

The leading passer for Louisville is Malik Cunningham with 883 yards, seven touchdowns and two interceptions. Javian Hawkins leads all rushers for the Cardinals with 751 yards and four touchdowns. Tutu Atwell is the leading receiver with 546 yards and six touchdowns. Khane Pass leads the Cardinals in tackles with 56.

Virginia is 4-1 ATS in its last 5 versus Louisville

The OVER has cashed in 4 of the Cavaliers last 6

The OVER has cashed in 10 of the Cardinals last 15

Louisville is going through a complete rebuild this season and although the Cardinals gave Clemson a tough time for two quarters, they were beaten badly in the end. Louisville has failed to cover the number in 4 of its last 5 head-to-head with Virginia and in 15 of its last 20 overall. The Cavaliers on the other hand have covered the number in 4 of the last 5 played during October and have won 5 of the last 7 straight up. Final Score Prediction, Virginia Cavaliers win and cover ATS 34-22