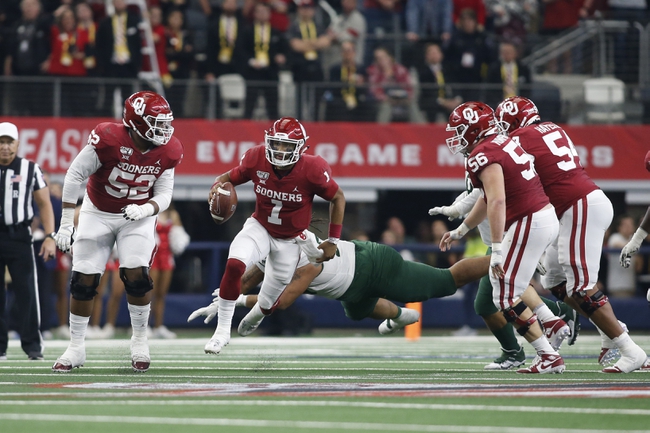 The Oklahoma Sooners (12-1) will take on the LSU Tigers (13-0) at the Mercedes-Benz Stadium. Oklahoma took a loss to Kansas State on October 26th. Many thought that Oklahoma’s chances to make the College Football Playoff were over. Then the Sooners reeled off five more wins, one coming in the Big 12 Championship, to reach the Semi-Finals against LSU.

Oklahoma is led by quarterback Jalen Hurts, the senior transfer from Alabama. He has thrown for 3634 yards and thrown for 32 touchdowns while throwing just seven interceptions. He’s also leading Oklahoma on the ground with 1255 yards and 18 touchdowns. Combined, Hurts, who will be runner-up in the Heisman voting, scored 50 touchdowns in 13 games. Hurts has been throwing at his favorite target, Ceedee Lamb, who caught 58 receptions for 1,208 yards and 14 touchdowns.

LSU has played a perfect season so far, along with Clemson and Ohio State. The Tigers have defeated five AP Top 10 teams and will have to face two more. With a win against Oklahoma, they’ll have a chance to create history winning seven AP Top 10 match-ups. That would be half of the Tigers season. Joe Burrow will absolutely win the Heisman award with an SEC and FBS record-breaking season. He threw for 4,715 yards for 48 touchdowns and just six interceptions. He’s been finding his favorite target in Jamarr Chase who had 73 receptions for 1498 yards and 18 touchdowns.

This is a match-up between two high powered offense but it's LSU’s defense that has started to pick it up, with solid performances against Texas A&M and Georgia.

The Tigers are a team of destiny. They have the Heisman, Coach of the Year, Assistant of the Year, Wide Receiver of the Year. They have everything, except for a national title. They’ll be one step closer after this one with an offensive outburst and solid defense. Final Score Predictions: LSU win and cover ATS, 45-24.