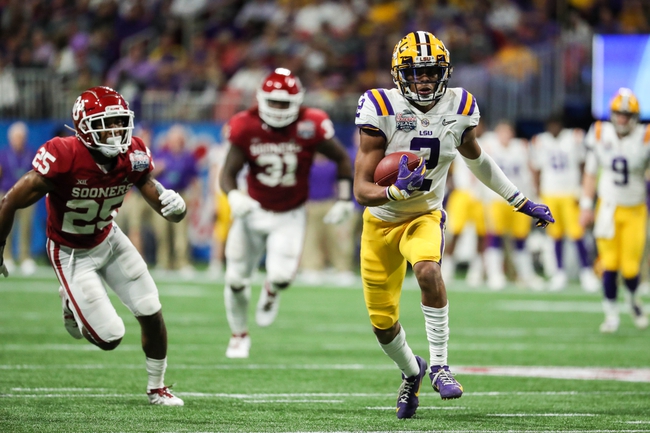 The Clemson Tigers and LSU Tigers are set to visit Mercedes-Benz Superdome in New Orleans, Louisiana for the CFP National Championship. The Clemson Tigers come into this matchup with a 14-0 record, and they will be looking to continue their success after winning the PlayStation Fiesta Bowl against the Ohio State Buckeyes, 29-23. Sophomore QB Trevor Lawrence had a big game for Clemson as he threw for 259 yards and 2 TDs while also adding in 107 rushing yards and a TD. Junior RB Travis Etienne had an all-around productive game for the Tigers as he ran for a TD while also adding 98 receiving yards and 2 TDs.

The Clemson Tigers struggled on the defensive side of the ball against the Ohio State Buckeyes as they allowed them to score 23 points and rack up a total of 516 yards of offense. Senior LB Chad Smith led the way for the Clemson defense with 12 tackles. The Tigers were able to force a couple of crucial turnovers against the Buckeyes as junior LB Isaiah Simmons and junior safety Nolan Turner each contributed interceptions in the 2nd half.

The LSU Tigers come into this matchup with a 14-0 record, and they will be looking to continue their success after winning the Chick-Fil-A Peach Bowl against the Oklahoma Sooners, 63-28. Senior QB Joe Burrow had a big game for LSU as he connected on 29 of his 39 pass attempts for 493 yards and 7 TDs while also adding in a rushing TD. Junior WR Justin Jefferson was the top target for Burrow and the Tigers as he hauled in 14 catches for 227 yards and 4 TDs.

The LSU Tigers were solid on the defensive side of the ball against the Oklahoma Sooners as they held them to 28 points and a total of 322 yards of offense. Junior LB Patrick Queen led the way for the LSU defense with 8 tackles and 1.5 TFL. The secondary had a productive outing for the Tigers as junior CB Kary Vincent Jr. contributed 4 tackles and the lone interception of the game while freshman CB Jay Ward pitched in 2 passes defended.

The Clemson Tigers are the defending national champions and you have to appreciate the grit they showed after going down 16-0 to Ohio State, but LSU is one of the best college football teams of all time. The Clemson defense is ranked 1st in the nation as they are holding their opponents to an average of 11.5 PPG, but the Ohio State Buckeyes were able to put up 516 yards of offense plus multiple red zone trips. The LSU offense is by far better than the Ohio State offense as Heisman winner Joe Burrow has thrown for 5208 yards, 55 TDs, and 6 interceptions, and he has an arsenal weapons to throw at with J’Marr Chase and Justin Jefferson combining for 2993 yards and 36 TDs. The LSU defense has been a question mark all season, but they held the powerful Oklahoma offense to only 322 yards which is 215 yards below their average per game. LSU has a very talented secondary which could make life difficult for the talented Clemson WRs, and I think they pull away with turnovers in the 2nd half. LSU is the better team, and this game is being played only an hour away from campus, take the Tigers to win this by at least 10 points.

The pick in this article is the opinion of the writer, not a Sports Chat Place site consensus.
Previous Pick
Miami (OH) RedHawks vs. Louisiana Ragin' Cajuns - 1/6/20 College Football Pick, Odds, and Prediction
Next Pick
What School Has Won The Most College Football National Championships?