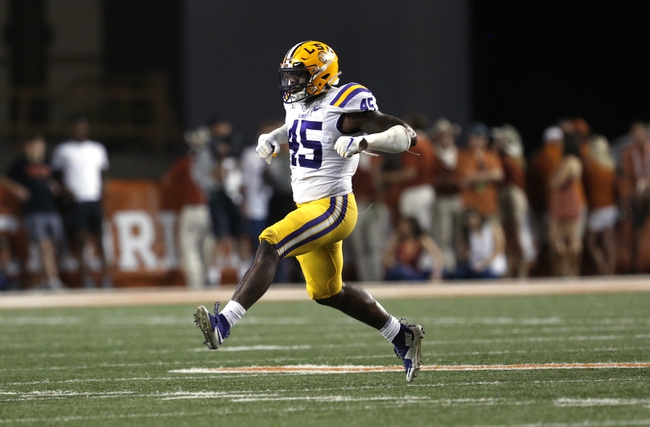 The Northwestern State Demons and the LSU Tigers meet in a week 3 college football matchup from Tiger Stadium on Saturday night.

The Northwestern State Demons will look to pull off a massive road upset to break their winless start to the season, falling to 0-2 after a 33-7 loss to D-II foe Midwestern State last time out. Shelton Eppler has thrown for 564 yards, 3 touchdowns and 2 interceptions on 71 of 104 passing, good for a 68.2% completion percentage. Eppler also leads the Demons in rushing with 54 rushing yards while Jared West has the Demons’ lone rushing touchdown this season. Quan Shorts leads Northwestern State’s receiving corps with 20 catches for 171 yards and a pair of touchdowns this year. Defensively, Adrion Robertson leads NSU with 13 tackles while Jomard Valsin is right behind with 12 tackles this season. As a team, Northwestern State is averaging 363 yards of total offense and 13.5 points per game.

The LSU Tigers will look to build on their 2-0 start to the year after a big time 45-38 road win over Texas in their last outing. Joe Burrow has thrown for 749 yards, 9 touchdowns and an interception on 54 of 66 passing, good enough for an 81.8% completion percentage. Clyde Edwards-Helaire leads LSU in rushing with 132 rushing yards and a pair of touchdowns while Justin Jefferson leads the Tigers in receiving with 14 receptions for 250 yards and 4 touchdowns. Ja’Marr Chase has 10 grabs for 168 yards while Terrace Marshall Jr. has 10 receptions of his own for 154 yards and 4 touchdowns as well. Defensively, Jacob Phillips leads LSU with 17 tackles while JaCoby Stevens is right behind with 15 tackles this season. As a team, LSU is averaging 522.5 yards of total offense and 50 points per game this season.

I’d like to think that Northwestern State will put forth a good showing, and laying these kinds of lines is asking for a backdoor cover when a big name team like LSU gets bored. However, LSU just racked up 45 points against a very good Texas team and have shown an insane ability to put points on the board in a hurry. Northwestern State hasn’t been able to do much offensively against FCS teams lately and just lost to a D-II school in a beatdown. I’d leave this one alone, but if I had to pick, I’d lay the points with LSU here.