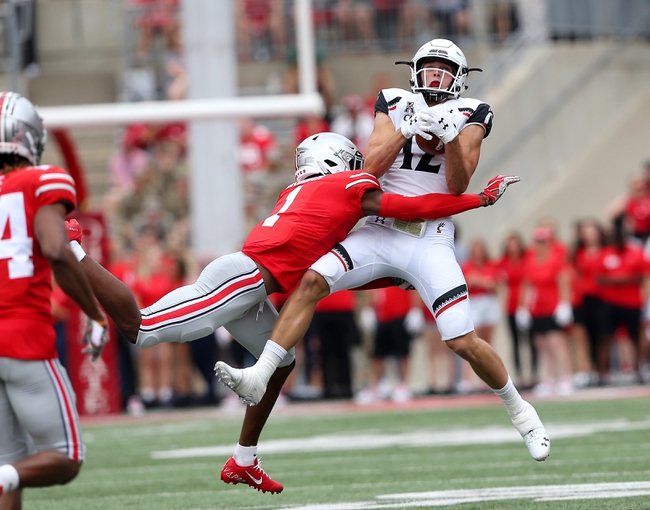 The Cincinnati Bearcats and the Marshall Thundering Herd meet in a week 5 non-conference college football matchup from Joan C. Edwards Stadium on Saturday.

The Cincinnati Bearcats will look to build on a 35-13 win over Miami-Ohio in their last outing to get to 2-1 on the year. Desmond Ridder has thrown for 594 yards, 4 touchdowns and 3 interceptions on 59.2% passing this season while Michael Warren II has a team-high 220 rushing yards and 4 rushing scores this season. Alec Pierce leads the Bearcats with 169 receiving yards while Josiah Deguara has a team-high 9 grabs for 141 yards and a pair of touchdowns. Defensively, Darrick Forrest leads Cincinnati with 25 total tackles including 16 solo tackles while Bryan Wright has a pair of sacks and Michael Pitts has a team-high 3 sacks this season. As a team, Cincinnati is averaging 370 yards of total offense and 19.7 points per game while allowing 311 yards of total defense and 23 points per game against this season.

The Marshall Thundering Herd will look to build on their own 2-1 record after a 33-31 win over Ohio in their last outing. Isaiah Green has thrown for 500 yards, 6 touchdowns and 2 interceptions on 61.6% passing while Brenden Knox has rushed for 247 rushing yards and 4 touchdowns this season. Corey Gammage leads the Herd in receiving with 8 grabs for 122 yards this season. Defensively, Tavante Beckett leads the Thundering Herd with 31 total tackles this season. As a team, Marshall is allowing 434.3 yards of total offense and 32 points per game while allowing 377.3 yards of total defense and 20.7 points per game against this season.

The free field goal at home with Marshall is worth a look as the Thundering Herd took it to Cincinnati in their only recent meeting, and that was on the Bearcats’ home turf. The Thundering Herd are also the better offensive team here. However, both teams have had an extra week to rest up and prepare for this game, and I just think that the rest did more for Cincinnati who had some guys banged up who will be ready to go for this one. I think that laying the field goal with the more battle tested team in Cincinnati is the way to go here.