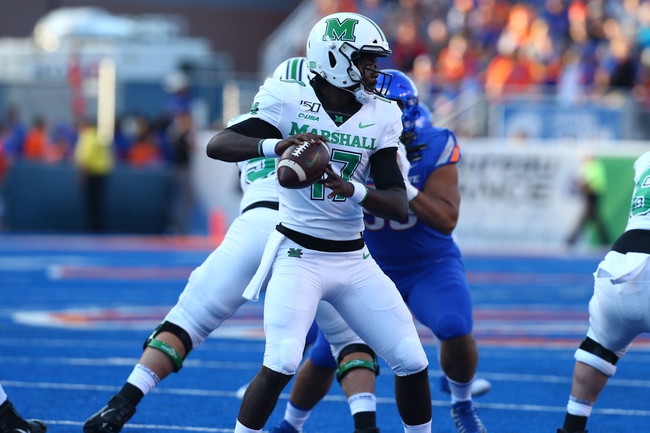 The Ohio Bobcats and the Marshall Thundering Herd meet in a week 3 college football matchup from Joan C. Edwards Stadium on Saturday evening.

The Ohio Bobcats will look to bounce back from their first loss of the season, falling to 1-1 on the year after a 20-10 loss to Pittsburgh last time out. Nathan Rourke has thrown for 365 yards and 2 touchdowns on 31 of 49 passing, good enough for a 63.3% completion percentage. O’Shaan Allison and De’Montre Tuggle each have a team-high 85 rushing yards with Tuggle logging 3 touchdowns this season. Jerome Buckner leads Ohio’s receiving group with 7 grabs for 108 yards this season. Defensively, Dylan Conner leads Ohio with 18 tackles while Jared Dorsa, Eric Popp and Javon Hogan each have 15 tackles through two games. As a team, Ohio is averaging 339 yards of total offense and 25.5 points per game this season.

The Marshall Thundering Herd will also be looking to rebound from their first loss of the season, coming in the form of a 14-7 loss to Boise State to fall to 1-1. Isaiah Green has thrown for 294 yards, 4 touchdowns and 2 interceptions on 28 of 45 passing, good for a 62.2% completion percentage. Brenden Knox leads Marshall in rushing with 114 yards and 3 touchdowns while Corey Gammage leads the Herd with 5 receptions for 82 yards and a touchdown this season. Defensively, Tavante Beckett leads Marshall with 20 tackles this season. As a team, Marshall is averaging 396 yards of total offense and 31.5 points per game this season.

Both of these teams had disappointing performances last time out, but I’m willing to give both a pass as Pitt is a decent team in the ACC and a lot of teams have had issues against Marshall on the blue turf. However, some trends are hard to ignore, like the dominance that the home team has had in this matchup for quite some time against the number. I think Marshall is capable of winning this one by a touchdown so I’ll side with the better offensive team and I think that’s the Thundering Herd so I’ll lay the points here.