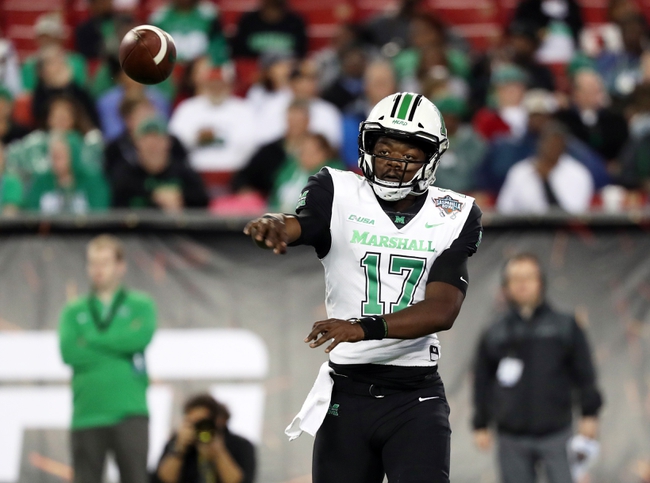 The VMI Keydets and the Marshall Thundering Herd meet in a week 1 college football matchup from the Joan C. Edwards Stadium on Saturday evening.

The VMI Keydets will look to rebound in 2019 after a 1-10 mark, including an 0-8 record in SoCon play to finish in last place in the conference standings. The Keydets started the year by being blown out in their first two games, but had a pair of two point losses to Western Carolina and the Citadel, a three point loss to East Tennessee State and a seven point loss at Chattanooga. Reece Udinski threw for 3,082 yards and 20 touchdowns last season and is back under center for VMI this season. Kris Thornton and Javeon Lara return to lead VMI’s receiving group after combining for 1,828 yards and 11 touchdowns last season. Defensively, the Keydets will be looking to improve after allowing a whopping 48.2 points per game last season.

The Marshall Thundering Herd come into the 2019 campaign looking to build on a solid 2018 season, finishing the year with a 9-4 overall record, including a 6-2 mark in C-USA play, finishing in a tie for 2nd in the C-USA East division. The Thundering Herd received an invite to the Gasparilla Bowl, defeating South Florida by a final score of 38-20. Isaiah Green is back at QB for Marshall after throwing for 2,459 yards, 15 touchdowns and 10 interceptions on 56.7% passing. Tyler King and Brenden Knox are both back in the Marshall backfield after combining for 1,233 yards and 8 rushing scores last season. The Herd lost Tyre Brady who led the Marshall receiving group with 71 grabs and 1,002 yards last season, but Obi Obialo is back to lead the corps after logging 42 catches for 505 yards and 4 TDs last year. Defensively, a lot of last year’s defense is gone, but Channing Hames returns after recording 45 tackles, including a team-high 12.5 tackles for a loss as well as 7.5 sacks last season while Chris Jackson is back at corner and Nazeeh Johnson is back at free safety for the Herd. As a team, Marshall averaged 393.9 yards of total offense and 28.2 points per game while allowing 338.7 yards and 21.8 points per game last season.

I fully expect Marshall to win this game after a solid showing last season, but laying this kind of line feels a bit extreme considering that VMI brings back a boatload of starters from last year’s team. I get it, VMI lost to two FBS opponents last year by a combined score of 143-17 and 252-41 since 2016 but VMI did have some close games last season and laying this kind of line is asking for a backdoor cover. I’ll take a shot with VMI and the points in this one, but the best play is to probably leave this one alone altogether.