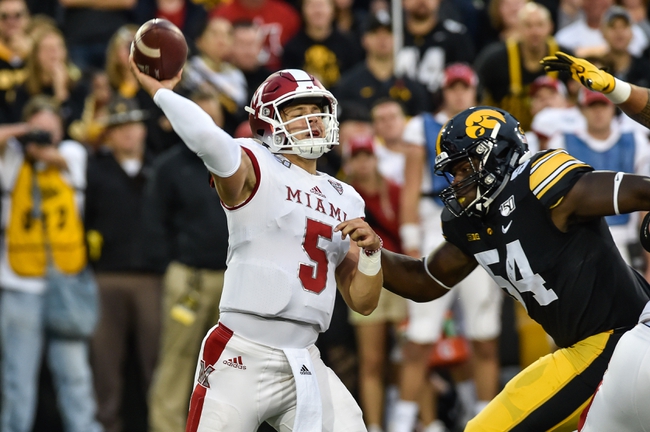 The Miami (OH) RedHawks look for a victory after losing their opener to the Iowa Hawkeyes by 24 points. The Miami (OH) RedHawks have split their last six home games. Brett Gabbert is completing 63 percent of his passes for 186 yards, two touchdowns and one interception. Gabbert enters this game with 27 career pass attempts. Luke Mayock and Jack Sorenson have combined for 109 receiving yards and one touchdown while Jalen Walker has one reception. The Miami (OH) RedHawks ground game is averaging 59 yards per contest, and Davion Johnson leads the way with 22 yards on six carries. Defensively, Miami (OH) is allowing 38 points and 465 yards per game. Ryan McWood leads the Miami (OH) RedHawks with 10 tackles, Zedrick Raymond has one pass deflection and Kobe Burse has one quarterback hurry.

It seems like the Tennessee Tech Golden Eagles get waxed whenever they step up in competition, and this is obviously one of those times. However, I'm not sure the Miami (OH) RedHawks are capable of blowing teams out and I don't love laying monster sized chalk this early in the season when still breaking in a young quarterback. There's obviously better options on a loaded Saturday card, but if forced to pick, I want the points with Tennessee Tech.