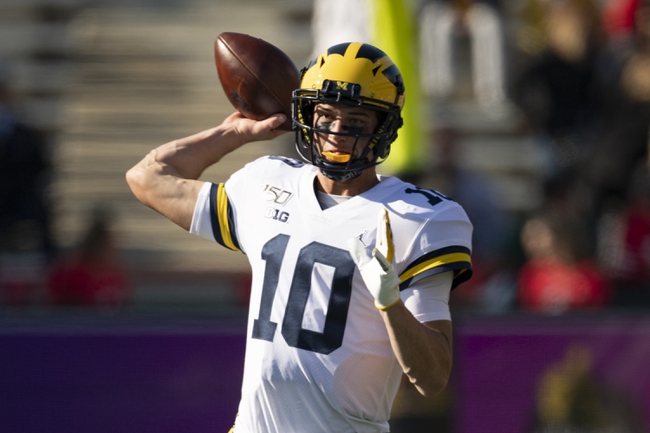 The Michigan State Spartans get to stay in the state of Michigan on Saturday for a game against their state rival, the #14 Michigan Wolverines in a match up of Big 10 teams.  In their last game, Michigan State lost to Illinois by the score of 37-34 in a game that saw Michigan State get outscored 27-3 in the 4th quarter.  Michigan State quarterback Brian Lewerke completed just 19 of his 36 passing attemps for a touchdown and 3 interceptions while also rushing 11 times for 96 yards and a touchdown.  Spartans running back Elijah Day was Michigan States leading receiver as he rushed 28 times for 170 yards and 2 touchdowns.  The lead receiver for Michigan State was Cody White who caught 7 passes for 128 yards but failed to ever get into the end zone.  The Michigan State defense allowed a total of 405 yards of offense to Illinois and while holding the Illini to just 36 yards on the ground, gave up 369 passing yards.

On the year, Michigan State is now 4-5 overall and 2-4 in conference play which places them in 5th place in the Big 10 East Division.  Quarterback Brian Lewerke has thrown for 2,012 yards and 12 touchdowns while also throwing 7 interceptions.  Elijah Collins has rushed for 715 yards and 5 touchdowns on 143 carries on the year.  Michigan State’s lead receiver is Darrell Stewart Jr. who has caught 47 passes for 649 yards and 4 touchdowns on the season.

The Michigan Wolverines welcome the Michigan State Spartans to campus after winning their last game against Maryland by the score of 38-7.  Michigan quarterback Shea Patterson completed 13 of 22 passes for 151 yards and a touchdown on the day.  Michigan’s lead rusher on Saturday was Hassan Haskins who carried the ball 13 times for 60 yards.  The lead receiver for Michigan was Nico Collins who caught 2 passes for 65 yards in the game.  The Michigan defense allowed a total of 233 yards to Maryland, including just 104 yards through the air.

With the win, Michigan moved to 7-2 overall and 4-2 in conference play which is good enough for 4th place in the Big 10 East Division.  Shea Patterson has thrown for a total of 1,773 yards and 12 touchdowns against 4 interceptions on the season.  Zach Charbonnet has been the Wolverines lead rusher on the year and has rushed for 559 and 11 touchdowns on 117 carries on the year.  Michigan’s lead receiver is Ronnie Bell who has caught 27 passes for 460 yards on the season but has yet to record a touchdown.