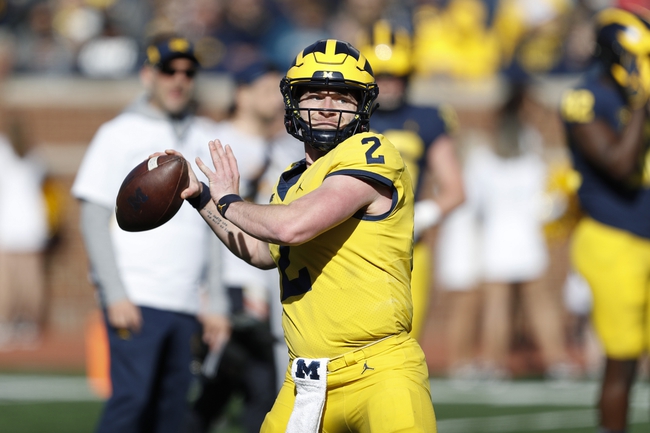 The Middle Tennessee Blue Raiders have won no less than seven games in each of the last four years and have a chance to get one of the bigger wins in program history. The Middle Tennessee Blue Raiders have split their last six road games. Middle Tennessee returns four starters from an offense that averaged 28 points and 393.4 yards per game. Asher O'Hara will takeover at quarterback after throwing 20 passes last season in a backup role. Chaton Mobley and Terelle West will once again be an effective 1-2 punch at running back and Ty Lee is back as the Blue Raiders leading receiver. Middle Tennessee returns six starters from a defense that allowed 267 points and 377.9 yards per game. Reed Blankenship is one of the better defensive backs you’ve probably never heard of, and he’s coming off a season where he had 107 tackles, seven pass deflections and four interceptions. DQ Thomas had seven sacks, 13.5 tackles for loss and two forced fumbles.

The Michigan Wolverines won double-digit games for the third time under coach Jim Harbaugh, but expectations have to be higher as he enters his fifth season. The Michigan Wolverines have won 11 of their last 13 home games. Michigan returns eight starters from an offense that averaged 35.2 points and 419.5 yards per game. Shea Patterson is one of the better returning quarterbacks in the country and makes the Wolverines a title contender if he plays to his potential. Michigan also has his top-two targets returning in Nico Collins and Donovan Peoples-Jones, a receiving duo that combined for 14 of his 22 passing touchdowns. Michigan returns five starters from a defense that allowed 19.4 points and 275.2 yards per game. Michigan has to replace its top-three tacklers from last year and leader in Devin Bush, but linebacker Josh Ross is coming off a promising sophomore season and Josh Uche returns after leading Michigan with seven sacks. Honestly, Harbaugh is starting to run out of excuses for why this program isn’t taking the next step. This could be a do-or-die season for the Michigan Wolverines.

The Middle Tennessee Blue Raiders were a decent team last year and have some talent on both sides of the ball, but they're out of their league in this one. While I'm not the one to say this could be the year the Michigan Wolverines win it all, as everybody has been saying that the last four years or so, they certainly have the pieces to make a run and should beat the hell out of lesser teams. Like I said previously, the excuses are done. Either Harbaugh leads this team to the college football playoff or heads could roll in Ann Arbor. It's critical Michigan makes an early statement and takes care of business in impressive fashion. The Middle Tennessee Blue Raiders are just the team in the way.