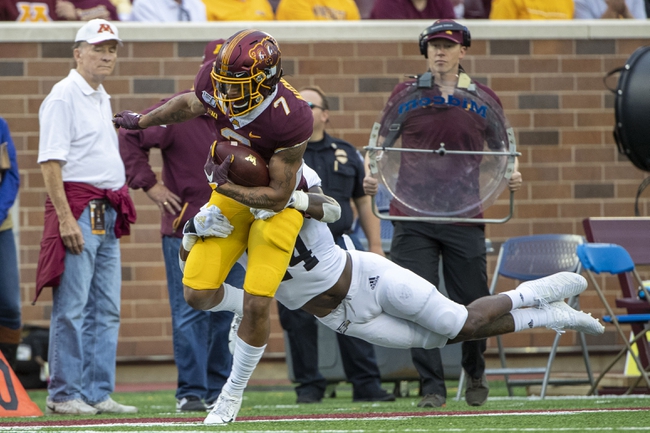 On Saturday, the Illinois Fighting Illini visit TCF Bank Stadium in Minneapolis, Minnesota to face the Minnesota Golden Gophers in a Big Ten showdown. The Illini have a 2-2 record through four games of the regular season. Illinois is coming off a bye and lost its second straight to Nebraska 42-38 in its last outing. Brandon Peters threw for 78 yards, one touchdown and one interception in the loss to the Huskers and Reggie Corbin rushed for 134 yards.

The Golden Gophers improved to 4-0 following its 38-31 win on the road over Purdue. Tanner Morgan threw for 396 yards and four touchdowns in Minnesota’s win over the Boilermakers. Morgan hit Rashod Bateman with touchdown passes of 45 and 48 yards, Chris Autman-Bell with a 70-yarder and Tyler Johnson with a short 3-yard toss.

Tanner Morgan has passed for 1,095 yards, 10 touchdowns and two interceptions for the Golden Gophers. The leading rusher for Minnesota is Rodney Smith with 325 yards and two touchdowns. Rashod Bateman leads the receiving corps with 466 yards and four touchdowns. The leading tackler is Jordan Howden with 23.

The Golden Gophers are playing extremely well to start the season at 4-0 behind the excellent leadership of quarterback Tanner Morgan with 10 touchdown passes. Illinois has allowed far too many points defensively giving up 25.5 per game. Illinois has covered just 1 of its last 5 played on the road. Final Score Prediction, Minnesota Golden Gophers win and cover ATS 38-20