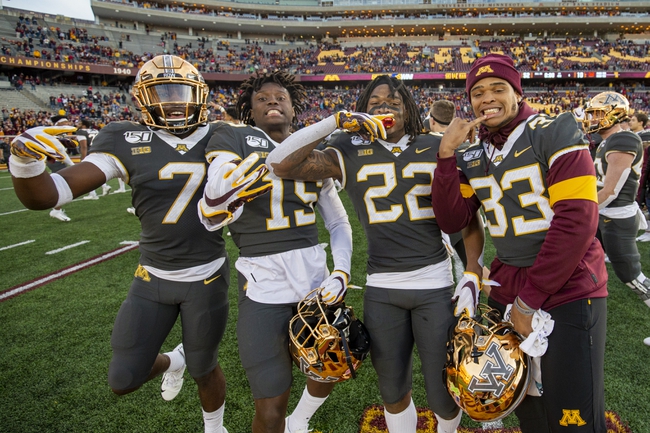 Two undefeated team's square off in a battle for Big Ten championship consideration.  The 5th ranked Penn State Nittany Lions take their (8-0) record on the road face the (8-0) and 13th ranked Minnesota Golden Gophers.  Penn State who is coming off a bye week.  The Nittany Lions last game out was a 28-7 win on the road over Michigan State. The Golden Gophers have been steam rolling their opponents over the last 4 weeks.  Minnesota was also on a bye this past week.  Most recently the Golden Gophers enjoyed a 52-10 home win over Maryland.

In the win over Michigan State, Penn State quarterback Sean Clifford was 18 of 32 for 189 yds, while throwing 4 touchdowns, and 1 interception.  Clifford and Pat Freiermuth hooked up for 3 touchdowns in the game.  Penn State out gained the Spartans 302 to 265.  The Nittany Lions defense came up big in the game, forcing 4 turnovers.  The Nittany Lions defense also held Michigan State to just 83 yds rushing.

Penn State is 1-7 ATS in their last 8 games following a ATS win.

The under is 5-1 in Penn State's last 6 games overall.

Minnesota is 6-0 ATS in their last 6 conference games.

Minnesota is 5-1 ATS vs a team with a winning record.

The under is 5-2 inMinnesota's last 7 home games.

Minnesota came into this season highly under rated and have shown just how good of a team the Golden Gophers have.  In Minnesota's last 4 games, the Golden Gophers are out scoring their opponent by almost 32 points.  Penn State on the other hand has been getting wins, but not by a lot.  The Nittany Lions have won 3 games in their last 6 by 7 points or less.  However, a win is a win, doesn't matter how you get it.  The final score's can impact how one will bet these teams against the spread.  Minnesota was under rated coming into the season and I still don't think the Golden Gophers are getting the respect they deserve, especially at home.  I am going to take Minnesota to cover, but this can be a game that the Golden Gophers could win.  Be safe and take Minnesota and the points.  Final score prediction, Penn State will win and Minnesota covers, 31-28.