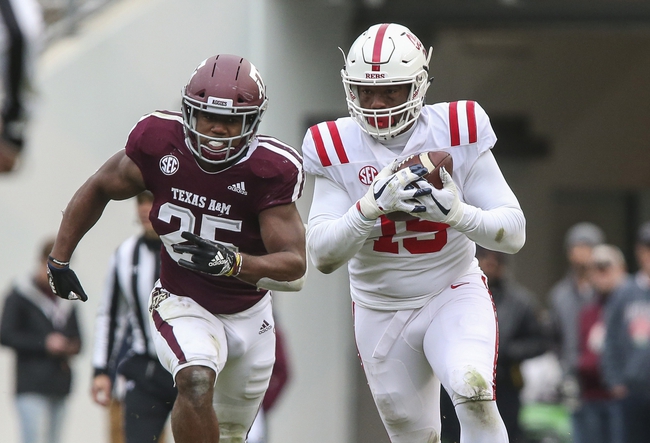 Aggies are led offensively by quarterback Kellen Mond, he has completed 63% of his passes for 1,597 yds and has thrown 12 TD’s.  He has added 200 yds rushing and 3 scores on the ground. Mond’s go to receiver is Jhamon Ausbon, he has 37 receptions for 506 yds and 2 TD’s.  Quartney Davis and Jalen Wydermyer have each hauled in 4 touchdowns. Buddy Johnson leads the way defensively with 38 tackles.

Ole Miss have been going with two quarterbacks in recent games.  On the season Matt Corral is 78/130 for 977 yds, 4 TD’s and 1 INT.  John Rhys Plumlee is 35/70 for 425 yds, 4 TD’s and 1 INT. Plumlee also has 470 yds rushing and 4 TD’s. Running back Scottie Phillips has contributed 471 yds rushing and 5 touchdowns. It is no secret who both quarterbacks go to is, Elijah Moore has 44 receptions for 562 yds and 4 touchdowns.  The next closest receiver has 9 receptions. Lakia Henry leads the team in tackles with 49.

The Aggies are 9-4 ATS as a favorite.

The under is 8-5 when the Aggies are the favorite.

The Rebels are 2-7 ATS as an underdog.

The Rebels are 4-8 ATS in conference games.

The under is 3-0 when the Rebels are a home underdog.

Up to this point the Rebels have 3 wins(Arkansas, SE Louisiana, Vanderbilt) their best win is against Arkansas. Texas A&M has 3 wins(Texas State, Lamar, Arkansas) their best win is against Arkansas as well.  Both teams have beaten the teams they should and have lost to ranked opponents. Neither team has had a stellar schedule in non conference play but the Aggies played Auburn down to the wire and held Clemson to 24 points.  Texas A&M should cover, but I am going to take the under in this game. Final score prediction, Texas A&M wins 30-23 and the score goes under.