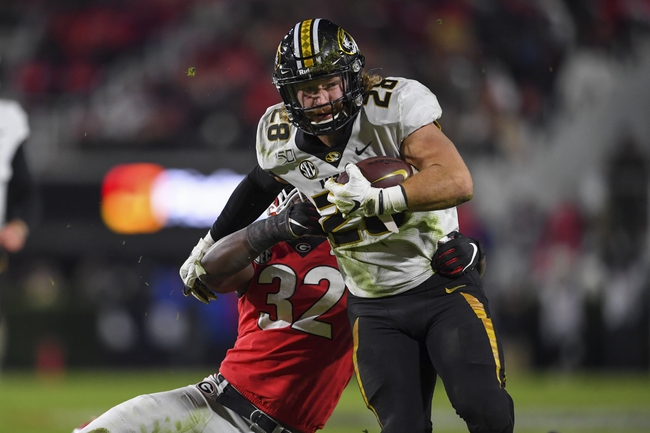 Missouri will look to stay perfect at home this season when the Tigers (5-4, 2-3 SEC) host the 11th-ranked Florida Gators (8-2, 5-2 SEC) at Memorial Stadium in Columbia, Mo. on Saturday. While other teams in the SEC have stolen the spotlight with their success, the Tigers have put together an impressive record at home at 5-0 despite the fact that those five home games have been sandwiched by four road losses.

Missouri opened the game with a 37-31 loss at Wyoming -- a strange road opener for any SEC team -- but followed with five straight home wins against West Virginia, Southeast Missouri State, South Carolina, Troy, and Ole Miss in which the Tigers outscored their opponents 202-58. Missouri, however, lost that momentum when it hit the road, losing 21-14 to Vanderbilt, 29-7 to Kentucky, and 27-0 to No. 6 Georgia. So while Missouri has outscored its opponents at home 202-58 at home, it is being outscored 114-52 on the road.

The Tigers have a balanced offense led by Kelly Bryant, who was unable to play in the shutout loss at Georgia last Saturday. Bryant’s hamstring is expected to be ready to go against Florida, but that is something to watch for. Missouri has no chance with Bryant. The senior has passed for 1,845 yards and 14 touchdowns with just five interceptions. The Tigers have eight receivers who have caught between 101 and 352 yards in passes with senior Jonathan Nance leading the way with 23 receptions for 352 yards. Junior Larry Rountree III leads the ground attack in Missouri’s balanced offense with 668 yards on the ground and eight touchdowns.

Bryant will be key for Missouri as the Tigers attempt to win their third straight over Florida. Over the past two seasons, Missouri has outscored the Gators by a resounding 83-33. But this is a different Florida team this year with the 38th best offense in FBS scoring 33.3 points per game paired with the ninth-best defense in FBS allowing just 15.0 points per game. The Gators have three shutouts this season and they also held Tennessee to just three points. But they can be scored upon, with five teams scoring more than 20 points on Florida, including three of the last four teams that it has faced.

Florida is 2-1 on the road this year and the game against Missouri will be its final regular-season road game of the season. The Gators edged Kentucky on the road, 29-21 and South Carolina, 38-27, but fell to LSU 42-28 in Baton Rouge. In contrast, Florida is 6-1 at home this year, outscoring its opponents 238-60 in Gainesville.

Junior quarterback Kyle Trask is completing 66.9 percent of his passes for 2,011 yards and 19 touchdowns against just six interceptions. Kyle Pitts leads a stable of receivers with 528 yards receiving with five touchdowns, while Lamical Perine is the team’s leading rusher with 504 yards and four scores.

Both teams have historically been good against the spread in this situation, but sometimes it makes sense just to look at what makes sense considering that football is a sport so dominated by motivation. Florida is ranked well in the nation, but its chances at the SEC championship game is minimal, and hopes of the College Football Playoff are even less. However, Missouri needs one win to be bowl eligible and this is one of the final home games for the Tiger seniors, so the motivation will be high.

The better team is Florida, but in this instance, go with the team that has done so well at home in the SEC against the spread. Take Missouri minus the points.