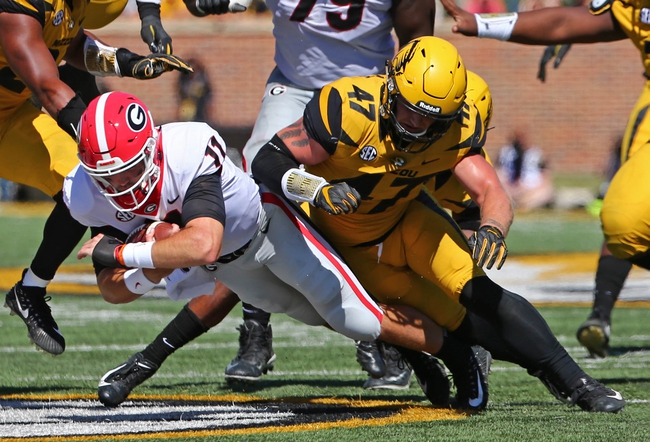 The Missouri Tigers hit the road for a matchup with the 6th ranked Georgia Bulldogs.  Missouri enters this contest with a record of (5-3).  Missouri is coming off a much needed bye week, the Tigers have lost 2 in a row.  Missouri lost to Kentucky 29-7 in their last game.   Georgia enters this home contest with a record of (6-1).  Georgia has won 2 in a row since their loss to South Carolina.  Georgia beat the 6th ranked Florida Gators 24-17, in their last game.

In the game against Kentucky, their was no score after the first quarter.  Kentucky then poured it on, out scoring Missouri 22- 0 in the 2nd quarter.  Missouri quarterback Kelly Bryant was 10 of 19 for 130 yds and a touchdown.  Tyler Badie added 2 receptions for 82 yds, with 1 of the receptions being a 74 yd touchdown.  Missouri was out gained 360 to 289 in the game.  Missouri did have two costly lost fumbles.

Georgia's defense was dominant through 3 quarters against Florida.  Georgia led 13-3 at halftime and 16-3 after the 3rd quarter.  Georgia was guided on offense by quarterback Jake Fromm.  Fromm was 20 of 30 for 279 yds and 2 TD's.  Lawrence Cager contributed 132 yds receiving on 7 receptions and a touchdown.  The Georgia defense held the Gators to an eye popping 21 yds rushing on 19 carries.  There were no turnovers in the game.

Missouri is 0-4 ATS in their last 4 road games.

Missouri is 6-2 ATS in their last 8 games vs a team with a winning record.

The under is 6-1 in Missouri's last 7 games overall.

Georgia is 7-2 ATS in their last 9 conference games.

The under is 5-1 in Georgia's last 6 games overall.

Georgia has won 6 of the last 7 meetings in this series against Missouri.  Missouri has lost their last 2 games, including a bad loss at Vanderbilt.  Missouri has been struggling to score points, which does not look like it will get better facing a Georgia defense that is allowing 10 points per game.  The Missouri defense has kept the Tigers in games this season, allowing an average of 18 points per game.  The under has been profitable for both teams and with Missouri struggling to score, I am going to take the under.  Final score prediction, Georgia will win and the total goes under, 27-17.