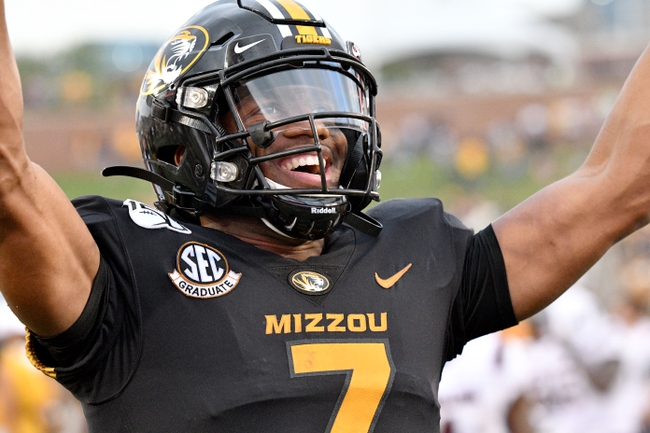 The Troy Trojans travel to take on the Missouri Tigers on Saturday in college football action at Faurot Field at Memorial Stadium.

The immediate thought when looking at this game is to look at the over. These are two of the most prolific offenses in the country with Troy coming in at 15th in FBS averaging 40.8 points per game and Missouri just behind at 21st with 38.3 points per game. Each team could miss their average by a touchdown (without the PAT) and still cover.

So why is the total set at 66.5? The answer is simple -- the bookmakers are depending on Missouri’s stout defense to slow down the massive Troy air attack. Senior quarterback Kaleb Barker has been amazing, passing for 1,367 yards in four games with 13 touchdowns and just two picks. Troy has scored 43, 35, 42, and 43 in its four games, but those games were against Arkansas State, Akron, Southern Miss, and Campbell, which is a far cry from what Missouri has been able to accomplish this season.

The Tigers currently rank 12th in the FBS in scoring defense allowing just 14.5 points per game. All betting will be determined through the Troy offense vs. Missouri defense matchup. If it turns into a shootout and Missouri isn’t able to slow down the Trojans attack, the over is a lock and Troy will cover. If the Tigers are able to just slow down Troy, Missouri will cover and the under will be the play.

There is little doubt that Kelly Bryant and Missouri’s offense will score and score often. But no one has been able to slow down Troy yet and I don’t think that Missouri will either. Take Missouri straight up, but win with Troy plus the points.