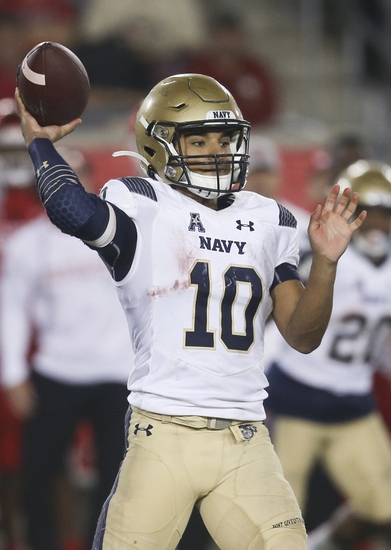 The Army Black Knights head to Lincoln Financial Field in Philadelphia, PA on Saturday to face their biggest rival, the #24 ranked Navy Midshipmen.  In their last game, Army was defeated by the Hawai’i Rainbow Warriors by the score of 52-31.  Three different quarterbacks saw action in the game against Hawai’i as Kelvin Hopkins Jr., Jemel Jones and Christian Anderson combined to completed 5 of 11 passes for 127 yards, no touchdowns and 2 interceptions.  The leading rusher for Army was Christian Anderson who carried the ball 12 times for 114 yards in the game.  Running back Sandon McCoy also had a big day on the ground for the Black Knights as he carried the ball 15 times for 91 yards and 2 touchdowns.  The leading receiver for Army was Article Hobbs IV who caught 1 pass for 69 yards.  The Black Knights gained a total of 554 yards of offense in the game with 447 coming on the ground while their defense allowed a total of 492 yards to the Rainbow Warriors, including 492 through the air.

With the loss to the Hawai’i, Army is now 5-7 on the season but will be looking to upset Navy.  Army’s option offense doesn’t involve much passing, so most of their yards come on the ground.    Quarterback Kelvin Hopkins Jr. is Army’s leading passer on the season as he has thrown for 570 yards and 4 touchdowns against 5 interceptions on the season.  Hopkins Jr. is also the leading rusher for the Black Knights as he has carried the ball 137 times for 706 yards and 7 touchdowns on the year.  Camden Harrison is Army’s leading receiver and has caught 23 passes for 415 yards and 3 touchdowns.

The #24 ranked Navy Midshipmen head to Philadelphia to play Army and will be looking to add another win to what has already been a stellar season for Navy.  In their last game, Navy defeated the Houston Cougars by the score of 56-41.  Much like Army, Navy also runs a heavy option game plan so most of their yards come on the ground.  Navy quarterback Malcolm Perry completed 2 of 4 passes for 104 yards on the day against Houston but didn’t throw a touchdown or an interception.  Perry carried the ball 18 times for 146 yards and 1 touchdown against the Cougars.  Navy fullback Jamale Carothers had monster day on the ground as he carried the ball 18 times for 188 yards and 5 touchdowns on the day.  The leading receiver for the Midshipmen was Keoni-Kordell Makekau who caught 1 pass for 60 yards in the game.  The Navy offense gained a total of 554 yards in the game with 447 coming on the ground while the defense allowed a total of 527 yards to Houston with 393 coming through the air.

With the win against Houston, Navy improved to 9-2 on the season and will be looking to get into double digits in the win column in their game against Army.  Navy quarterback Malcolm Perry has thrown for 1,027 yards and 6 touchdowns this year against 3 interceptions.  Perry has also been Navy’s leading rusher has he has carried the ball 238 times for 1,500 yards and 19 touchdowns.  The Midshipmen’s leading receiver is Mychal Cooper who has caught 15 passes for 355 yards and 2 touchdowns on the season but is listed as out for Saturday’s game against Army.