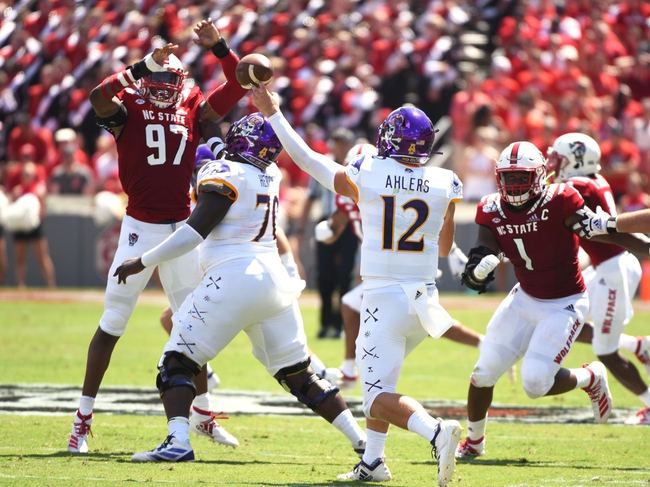 The East Carolina Pirates will look to build off of their first win of the season coming in the form of a 48-9 win over Gardner-Webb last time out. Holton Ahlers has thrown for 363 yards, a touchdown and 2 interceptions on 40 of 68 passing for a 58.8% completion percentage. Darius Pinnix Jr. leads East Carolina in rushing with 157 rushing yards and 2 touchdowns while Demetrius Mauney has added 104 rushing yards this season. Blake Proehl leads ECU in receiving with 12 grabs for 113 yards and a touchdown this season. Defensively, Xavier Smith leads East Carolina with 17 tackles while Alex Turner has 14 tackles and a pair of sacks for the Pirates. As a team, East Carolina is averaging 421.5 yards of total offense and 27 points per game this season.

The Navy Midshipmen will also look to build on their first win of the year after a 45-9 romp over Holy Cross last time out. Malcolm Perry has thrown for 103 yards on 6 of 9 passing this season while Nelson Smith leads the Midshipmen in rushing with 96 yards on 15 carries along with 3 touchdowns and C.J. Williams has 91 rushing yards on 10 carries. Mychal Cooper leads Navy’s receiving corps with 48 receiving yards this season. Diego Fagot leads Navy in tackling with 9 tackles this season. As a team, Navy is averaging 531 yards of total offense and 45 points per game this season.

East Carolina put a hurt on Gardner-Webb, but I’m still not solid on East Carolina, especially ATS where they’ve had a lot of issues for the last few years. Navy’s option is one of the more feared offenses in the country and head-to-head, the Midshipmen’s last 4 wins over East Carolina have been by no less than 24 points, including a combined 59 point margin of victory in the two meetings with both teams in the AAC. I just think this line is way too low given the history of these two teams, but hey I’ll take it. I’ll lay the touchdown with Navy here.