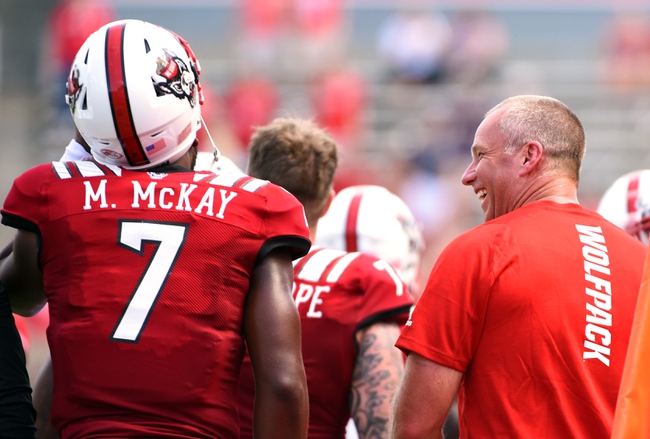 The Western Carolina Catamounts will match up with the NC State Wolfpack in college football action on Saturday.

Western Carolina opened things up with a blowout loss at the hands of the Mercer Bears 49-27. The Catamounts were down 42-14 at halftime and were pretty well stuck from there.

Tyrie Adams set the pace for the Catamounts in Week 1 with 318 yards, two touchdowns and one interception. Syheam McQueen led the rush on 67 yards, and DJ Thorpe posted 130 yards receiving for Western Carolina there.

Over on the NC State side, they posted a nice victory over East Carolina in their Week 1 game 34-6. The Wolfpack scored 17 points in each half of that one, and only allowed a pair of field goals.

Matthew McKay put up a nice day for NC State in the opener, tossing for 308 yards and a score, then running for two more. Thayer Thomas led the Wolfpack in receiving with his 83 yards on six grabs.

The Catamounts are 4-0 ATS in the last four road games versus a team with a winning home record and 4-1-2 ATS in their last seven after allowing more than 40 points in the previous game. The over is 8-2 in Western Carolina’s last 10 after posting less than 100 rush yards in their previous game.

With the Catamounts trailing pretty much the entire game in Week 1, the team put up some nice passing numbers that hint at the team’s potential in that area. Thing is, they got torched on the other side and will need to make some big adjustments.

With the Wolfpack coming in off a nice all-around opener victory however, I’m not sure it’ll go WCU’s way. I’m going NC State here.