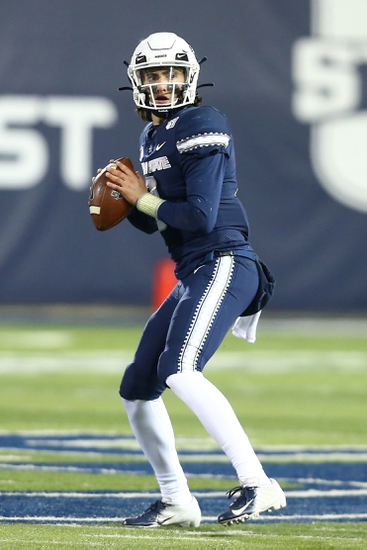 Utah State will look for a dominant performance before heading into the bowl season when the Aggies (6-5, 5-2 MWC) head to Dreamstyle Stadium in Albuquerque to take on New Mexico (2-9, 0-7 MWC) to finish the Lobos season. This is the third consecutive season that Utah State is bowl eligible and the third straight season that New Mexico will not go to a bowl game.

After a 2-1 start to the season, New Mexico is currently on an eight-game losing streak and is losing by an average of more than two touchdowns per game in that stretch. The last two weeks have been the worst losses of the year for the Lobos with a 42-9 loss to No. 21 Boise State and a 44-22 defeat against Air Force. To make things worse, starting quarterback Tevaka Tuioti, who was 3-of-11 for 35 yards at the time, was injured, and replacement Trae Hall marks the fourth quarterback that the Lobos have used this season.

After taking over for Tuioti, Hall was effective, completing 5-of-7 passed for 55 yards and two touchdowns. Cedric Patterson III was the leading receiver with two catches for 29 yards. Tuioti was the leading rusher before being taken out of the game, carrying eight times for 79 yards, while Bobby Cole rushed it 11 times for 58 yards in the loss.

New Mexico running backs Ahmari Davis and Bryson Carroll have both seen some success earlier in the season, but have struggled recently. Davis, the team’s leading rusher with 832 yards on the ground and seven touchdowns, had a 16-carry, 200-yard rushing day against Hawaii, and also rushed for 133 yards in a rivalry win over New Mexico State, but rushed just twice for nine yards last week against Boise State. Carroll, who is the Lobos’ second-best rusher with 474 yards, had a 26-carry, 193-yard game in a 35-21 loss to Colorado State, but in the Lobos’ last three games, he has rushed eight times for 10 yards against Hawaii, four times for nine yards against Nevada, and 10 times for 11 yards against Boise State.

Utah State still had a Mountain West Conference title in its sights before a blowout loss against Boise State eliminated the Aggies from contention. Despite a 6-5 record, Utah State has lost to some quality opponents, losing by three to open the season against a Wake Forest team that spent much of the season undefeated, big losses to nationally-ranked LSU and Boise State, as well as losing to BYU, which has wins over USC, Boise State, and Tennessee this season.

Despite some turnover troubles, it’s tough to see a way that New Mexico wins this game, and if Love throws the ball to his own team, this one looks to be a blowout. New Mexico ranks 109th in FBS scoring 22.0 points per game, while ranking 123rd allowing 37.1 points per game. That is out of 130 teams. This number just doesn’t seem big enough, so take Utah State and rest comfortably knowing that the Aggies will assuredly win by much more than two touchdowns.