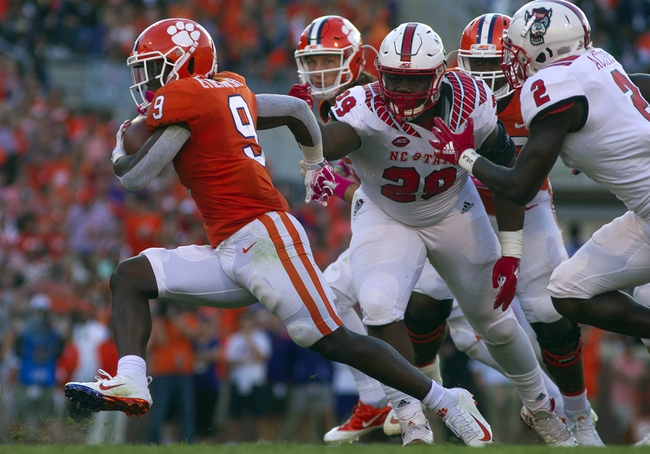 The 4th ranked Clemson Tigers take their perfect (9-0) record on the road for an ACC matchup with in state foe, the North Carolina State Wolfpack (4-4).  Clemson is coming off a non conference victory over Wofford 59-14 last time out.  NC State was blown out by nationally ranked Wake Forest 44-10, this past Saturday.

Clemson led 42-0 at halftime over Wofford and pushed their lead to 49 points, before Wofford found the end zone twice in the 3rd quarter.  Tigers quarterback Trevor Lawrence was 12 of 16 passing for 218 yds and 3 touchdowns.  Clemson running back Travis Etienne had a tremendous game, rushing for 212 yds on 9 carries and 2 touchdowns.  Tree Higgins added a 22 yd touchdown reception.  Higgins had 74 yds receiving in the game.  Clemson had an absurd 702 yds of total offense in the game.  The Tigers rushed for 212 yds en route to the victory.

NC State dell behind early to Wake Forest and were never able to threaten the Demon Deacons in this one.  NC State trailed 21-0 after the first quarter.  Devin Leary was 17 of 45 passing for 149 yds and a touchdown, while throwing 2 interceptions.  Cary Angeline added 3 receptions for 46 yds and a touchdown.  NC State was out gained 418 to 265 in the game.  The Wolfpack committed 3 turnovers in the game.

Clemson is 14-3 ATS in their last 17 conference games.

NC State is 1-6 ATS in their last 7 games overall.

NC State is 1-5 ATS vs a team with a winning record this season.

Clemson has been dismantling their opponents in the last 4 weeks.  Clemson has won by an average of almost 41 points during those 4 games.  Nc State hasn't had a terrible year defensively, allowing under 23 points per game.  However, the Clemson defense has been one of the best in the country.  The Tigers are allowing just over 11 points per game.  This is an in state opponent at home for NC State and I think this is just enough for the Wolfpack to cover here.  Clemson should still steam roll the Wolfpack but I think NC State is able to put together a couple better drives then last week.  Final score prediction, Clemson will win and NC State will cover, 50-20.