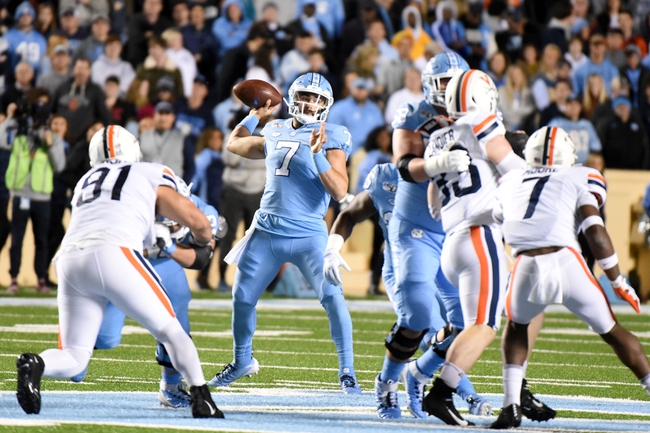 The North Carolina Tar Heels visit Carter-Finley Stadium in Raleigh, North Carolina on Saturday to play the North Carolina State Wolfpack. The Tar Heels improved to 5-6 on the season following a 56-7 rout at home against Mercer. Sam Howell passed for three touchdowns during the first half and has now thrown 32 TD pass and just six interceptions as a true freshman.

North Carolina State fell to 4-7 following a 28-26 loss on Thursday to Georgia Tech. NC State rallied to within two points in the last five minutes of the game, but a potentially game-tying two-point conversion was stopped short of the goal line by the Yellow Jackets defense. NC State had 457 yards of total offense in the loss with 230 yards rushing.

Devin Leary leads the Wolfpack with 1,122 yards passing, seven touchdowns and three interceptions. Zonavan Knight is the leading rusher with 689 yards and five touchdowns. Emeka Emezie leads all NC State receivers with 528 yards and two touchdowns. Tanner Ingle is the leading tackler with 69.

North Carolina has one of the best freshman quarterback’s in the nation in Sam Howell, who has thrown 32 touchdown passes and just six interceptions. The Tar Heels have covered the number in 19 of the last 27 after allowing fewer than 275 yards in its previous game. NC State has failed to cover each of its last 5 in the ACC. Final Score Prediction, North Carolina Tar Heels win and cover ATS 37-23