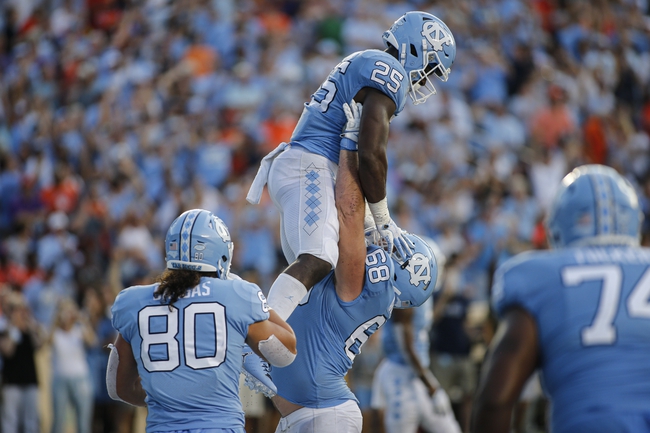 This is a matchup of teams that are in desperate need of a win as both sit on losing streaks. North Carolina’s heartbreaking 21-20 loss to No. 1 Clemson sent the Tar Heels to their third consecutive defeat, while Georgia Tech’s embarrassing 24-2 loss against Temple was the Yellow Jacket’s second in a row, and three losses in four games this year. Since both teams already have one ACC loss, a second loss would make it tough to imagine a pathway to an ACC Coastal title. But the winners would still remain firmly in the hunt in the ACC Coastal.

The difference in this one is probably going to Georgia Tech’s anemic offense. This is certainly not the Yellow Jacket team from just five years ago that averaged 37.9 points per game. In fact, this team isn’t managing even half that. As incredible as it may sound from Georgia Tech’s prolific offenses from recent memory, the Ramblin’ Wreck is averaging an FBS worst 13.5 points per game. That’s right -- Georgia Tech is 130th out of 130 in scoring offense in the FBS.

But wait, there’s more! Along with a season-opening loss to Clemson in which Georgia Tech scored 14 points in junk time, it has produced the worst offense in FBS against the likes of Temple (23rd in FBS in scoring defense), South Florida (105th in scoring defense), and The Citadel, currently ranked 78th in FCS scoring defense. Not impressive at all.

First-year head coach Geoff Collins’ up-tempo pro-style offense has been a mess so far this year and was shut out last Saturday in the loss to Temple. Two quarterbacks combined for 174 yards passing, no touchdowns, one interception, and two lost fumbles. The pair played while Tech awaits the return of regular starting QB Lucas Johnson, who suffered a shoulder injury in an overtime loss to The Citadel. But Johnson hasn’t been shredding defenses, either, completing 16-of-29 passes for 136 yards for the season while carrying the ball 17 times for 42 yards and a 2.5 yards per carry average.

North Carolina’s defense will be looking forward to playing a sputtering offense, however. It’s been a struggle with the Tar Heels allowing 24.8 points per game, but that same defense looked outstanding holding Clemson to 21 points. If Carolina’s defense can come out with that sort of intensity on the road against Georgia Tech, this will be a rout. But UNC’s offense is only 96th in FBS in scoring offense at 24.2 points per game.

In short, this is a tough game to pick. Last week’s game against Clemson was North Carolina’s and a road game in Atlanta are two very different things. UNC could easily have a letdown this week after the close call with the defending champs which could make this one more interesting than expected. The spread is too difficult to pick without having an idea if the same Carolina team will show up this week as last.

Combine the fact that these teams have hit the over just three times combined this year, the realistic chance of a Carolina letdown, and the unfortunate truth that these two offenses just aren’t very good and the only assumption that can be made is that a low-scoring game is on tap. Take the under.