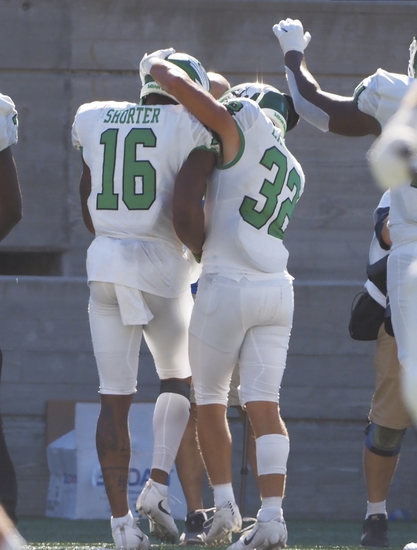 On Saturday, the UTEP Miners head to Denton, TX for a game against the University of North Texas Mean Green.  In UTEP’s last game, they were defeated 42-21 by the Louisiana Tech Bulldogs.  Miners quarterback Kai Locksley completed 17 of 30 passes on the day, while throwing 1 touchdown and no interceptions.  Locksley also ran 10 times for 17 yards and a touchdown.  The lead rusher for UTEP on the day was running back Treyvon Hughes who had 13 carries for 60 yards and a touchdown.  The lead receiver for UTEP was Jacob Cowing who caught just 2 passes but totaled 70 yards and scored a touchdown.  The UTEP defense simply couldn’t stop the LA Tech offense as they allowed 490 total yards with 338 coming through the air.

The loss against LA Tech was the Miners’ sixth loss in a row and bring their record to 1-6 overall and 0-4 in Conference USA play.  The leading passer for the UTEP Miners this season is Brandon Jones who has thrown for 628 yards, 2 touchdowns and 3 interceptions on the season and is listed as active for Saturday’s game against the Mean Green so it will be interesting to see if he or Locksley gets the start.  Hughes has been the teams leading rusher and has carried the ball 97 times for 422 yards and 7 touchdowns on the season.  The lead receiver on the year for UTEP has been Tre’shon Wolf who has caught 24 passes for 306 yards and 2 touchdowns so far this year.  The offense and defense have both struggled this year for the Miners.  The offense has scored just 18.1 points per game while the defense has allowed 34.3 points per game.

The North Texas Mean Green come into Saturday’s game after losing a close game to Charlotte 39-38.  North Texas was ahead for most of the game but was outscored 18-3 in the 4th quarter including a 49ers touchdown that sealed the game with just 18 seconds left.  North Texas quarterback Mason Fine completed 26 of 38 passes, throwing for an impressive 394 yards and 5 touchdowns, but it wasn’t enough to get the win for his team.  Wide receivers Michael Lawrence, Jaelon Darden and Jyaire Shorter all caught touchdown passes for North Texas in the loss.  Shorter was the most productive receiver, catching just 3 passes for 111 yards but all 3 catchers were touchdowns.  Running back Tre Siggers was the lead rusher for North Texas as he ran 17 times for 131 but never found the end zone.  The defense for North Texas allowed 589 total yards with 336 coming from the 49ers passing attack.

The Mean Green enter Saturday’s game with a 3-5 record overall, with a 2-2 record in conference play.  Fine has had an amazing year under center, throwing for 2,277 yards, 20 touchdowns and 6 interceptions.  Siggers has been the most productive running back for the Mean Green, rushing 86 times for 633 and 4 touchdowns. Darden leads North Texas in receiving and has caught 53 passes for 579 yards and 8 touchdowns on the year.  Although the offense has put up big numbers all year, the Mean Green weak point has been their defense.  North Texas averages scoring 32.9 points scored for game, but also averages giving up 33.3 points per game.

My prediction, boy, will this one get ugly fast!  The North Texas will get a break facing a UTEP team that doesn’t produce much offense while they face a defense who gives up a ton of yards.  The UTEP defense has given up 421.4 yards per game and the Mean Green average 460.1 yards per game and has played defenses much better than UTEP has to offer.  Look for Fine to have another monster game, just as he did against Charlotte as he faces a very soft UTEP defensive unit. North Texas wins this one 49-17 and covers the spread.