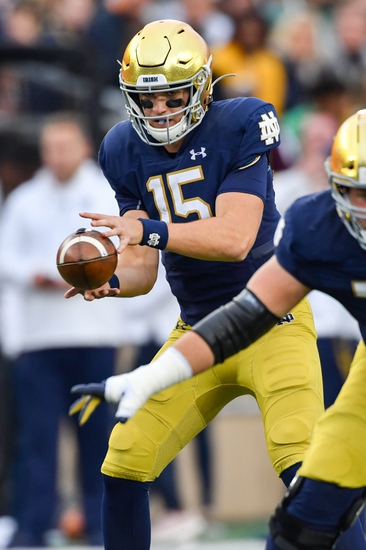 The USC Trojans will travel to Notre Dame to take on the Fighting Irish in non-conference action on Saturday.

The big rivalry game between the Trojans and Fighting Irish comes at a time with both teams in different places in their history. Notre Dame is ranked No. 9 in the nation, has four blowout wins and one narrow defeat on the road at the hands of No. 3 Georgia, and look poised to win out and attempt to sneak into the College Football Playoff. USC, on the other hand, sits in idle in a time when 6-8 wins seem acceptable as the university tries to deal with scandal while cleaning out administrative roles from the president to athletic director. It’s tough to imagine that Clay Helton’s job can maintain much longer.

It’s the inconsistency of the Trojans under Helton that really seems to be driving the USC faithful crazy in recent years, and that’s what makes this game at least a little it difficult to pick. Every time it seems that the Trojans’ backs are against the wall, they come up with a stellar performance to save Helton’s job, at least in the short term.

This year’s season has been a microcosm of Helton’s tenure as head coach. A ho-hum win over Fresno State left few expectations against Stanford. Then the Trojans blew out the Cardinal. That was followed by an overtime loss to BYU, but then USC battled to knock off then ranked No. 10 Utah. But the Trojans shot themselves in the foot in the second half when the game was there for the taking against Washington last week.

Now, with freshman Kedon Slovis returning for the Trojans, it just seems like one of those games where USC will give supreme effort in a game that it probably shouldn’t compete at all -- at least on paper.

Notre Dame has been dominant on defense all season long, allowing 23 points once against the No. 3 team in the nation. Aside from that one game, Notre Dame is allowing less than two touchdowns per game. And when the offense is scoring more than 40 points per game, that performance from the defense is more than sufficient.

It’s almost an impossible game to pick. USC will score and with Slovis under center, the wide receiver trio of Michael Pittman, Tyler Vaughns, and Amon-Ra St. Brown should be able to move the ball, even against the stiff defense of Notre Dame. And with Talanoa Hufanga also clearing the concussion protocol, the defense should put up a better effort than against Washington last week.

But Notre Dame has just been the overall better team this season. With Ian Book having an incredible season at quarterback with 1,254 yards passing with 13 touchdown passes with just two interceptions, it will be tough for the Trojans to slow the Irish down.

Even if this is a game that USC plays hard and injured players coming back, the key stat is this: USC is 6-14 against the spread in its last 20 games. That stat is enough to make any player to take pause and quit trying to figure how this will be a game for the Trojans. Take the Irish.