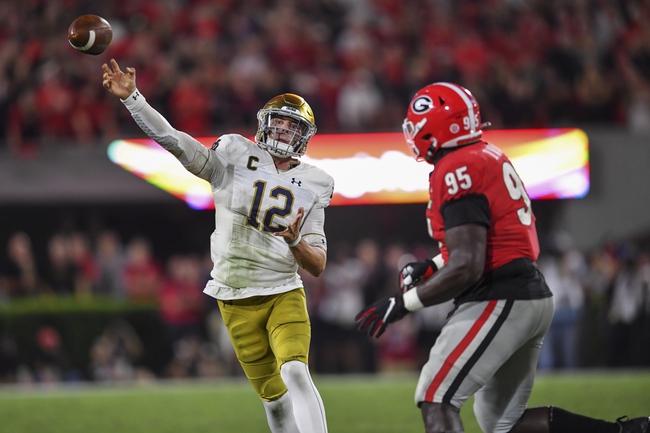 The Bowling Green Falcons visit the No. 9 ranked Notre Dame Fighting Irish on Saturday at Notre Dame Stadium in South Bend, Indiana. The Falcons were off on a bye this past week and fell to 1-3 after losing to Kent State 62-20 their last time out. Backup quarterback Grant Loy threw for one touchdown and rushed for another in the loss. Brandon Pierce led Bowling Green on defense with 15 tackles.

Darius Wade is the leading passer at Bowling Green with 664 yards, three touchdowns and three interceptions. Davon Jones leads all running backs for the Falcons with 205 yards and one touchdown, while wide out Quinten Morris is the top receiver with 218 yards and two touchdowns. Brandon Pierce leads Bowling Green in tackles with 38.

Notre Dame won for the third time in four games after beating Virginia 35-20 on Saturday. Julian Okwara collected three sacks for the Irish and Notre Dame had eight sacks in all. Notre Dame forced a fumble that was recovered and returned for a touchdown. Two key Notre Dame defensive players were injured in the win - defensive end Daelin Hayes and cornerback Shaun Crawford and both could miss several games or the remainder of the season.

Ian Book has passed for 993 yards, eight touchdowns and two interceptions for Notre Dame. The leading running back for the Fighting Irish is Tony Jones Jr. with 279 yards and four touchdowns. Wide receiver Chase Claypool leads the Irish with 286 yards and two touchdowns. Alohi Gilman is Notre Dame’s leader in tackles with 24.

Notre Dame was in its game against Georgia to the very end but came up just short against the Bulldogs. However, the following week Notre Dame put that loss behind them with a solid 15-point victory over Virginia. With Ian Book under center, the Irish have a strong arm and strong leader. Defensively, Notre Dame punishes opposing quarterbacks as the defense collected eight sacks against the Cavaliers. Final Score Prediction, Notre Dame Fighting Irish win and cover ATS 52-3