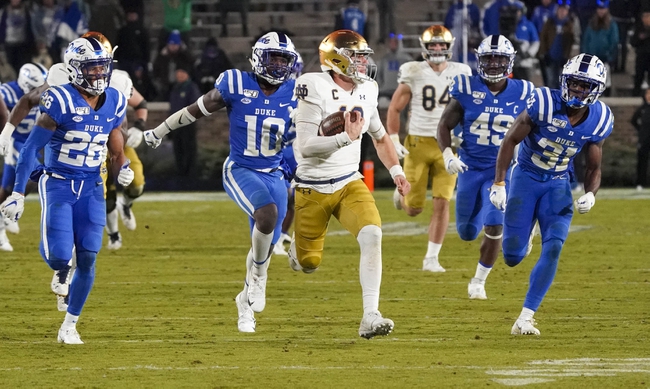 The No. 24 ranked Navy Midshipmen visit Notre Dame Stadium in South Bend, Indiana on Saturday to play the No. 15 ranked Notre Dame Fighting Irish. The Midshipmen had a bye in Week 11 and improved to 7-1 with a 56-10 victory during Week 10 over the UConn Huskies. Malcolm Perry passed for 165 yards and one touchdown and rushed for 108 yards and two touchdowns in the win.

Navy quarterback Malcolm Perry has thrown for 722 yards, five touchdowns and three interceptions, while leading Navy in rushing as well with 1,042 yards and 16 touchdowns. Mychal Cooper is the receiving leader for Navy with 241 yards. Diego Fagot is the leading tackler for Navy with 59.

Notre Dame improved to 7-2 following its 38-7 victory over the Duke Blue Devils. Ian Book gained 139 yards rushing and threw four passes for touchdowns as the Irish routed the Blue Devils Saturday night. Book finished with 182 yards passing, while Chris Finke had two touchdown receptions and George Takacs and Chase Claypool each had one touchdown reception.

Ian Book has passed for 2,009 yards, 21 touchdowns and six interceptions for Notre Dame. The leading running back for the Fighting Irish is Tony Jones Jr. with 585 yards and four touchdowns. Wide receiver Chase Claypool leads the Irish with 651 yards and five touchdowns. Asmar Bilal is Notre Dame’s leader in tackles with 56.

Navy has played very well to date with a strong running game led by dual-threat quarterback Malcolm Perry. The Midshipmen have had success against the Fighting Irish covering the number in 11 of the last 13 played in South Bend. Notre Dame has failed to cover the number in 17 of its last 23 played during November. Final Score Prediction, Navy Midshipmen win and cover ATS 31-27