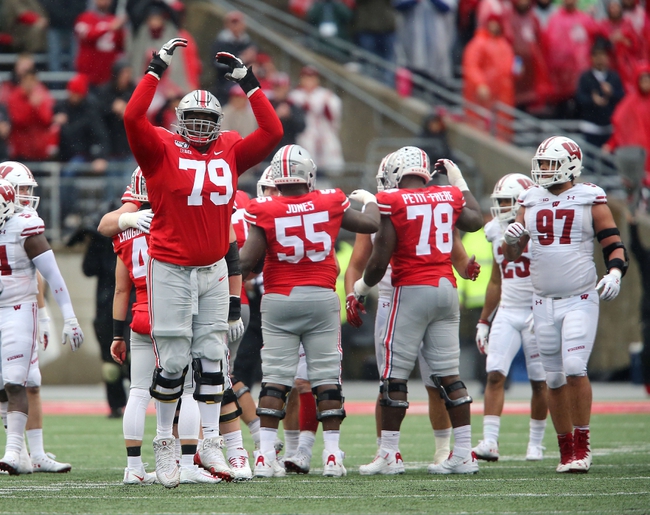 The number 1 ranked Ohio State Buckeyes will square off against the 12 ranked Wisconsin Badgers in the Big Ten Championship Game.  The Buckeyes are a perfect (12-0), coming off a 56-27 win at the Michigan Wolverines.  The Badgers are (10-2), after knocking off 8th ranked Minnesota, 38-17 on the road.

In the Buckeyes win over Michigan, Ohio State was led on offense by running back J.K. Dobbins.  Dobbins has an excellent day, rushing for 211 yds on 31 carries, while adding 4 touchdowns.  Quarterback Justin Fields passed for over 300 yds on 14 completions, adding 4 touchdowns through the air.  The Buckeyes dismantled the Wolverines, out gaining them 577 to 305.  The Buckeyes held Michigan to just 91 yds rushing, while forcing 2 Wolverines turnovers.

In the Badgers win over Minnesota, Wisconsin was guided on offense by quarterback Jack Coan.  Coan completed 15 of 22 passes for 280 yds and 2 touchdowns.  Badger running back Jonathan Taylor rushed for 76 yds on 18 carries and 2 scores.  Wisconsin out gained Minnesota, 453 to 372 in the game.  The Badgers rushed for 173 yds, while holding Minnesota to just 76 yds on the ground.  Wisconsin trailed 7-0 after the 1st quarter.

Buckeyes are 10-1 ATS vs a team with a winning record.

Buckeyes are 9-2 ATS in their last 11 conference games.

Badgers are 5-2 ATS vs a team with a winning record.

Badgers are 3-7 ATS in their last 10 games following a ATS win.

The over is 4-0 in Badgers last 4 conference games.

The Buckeyes are 5-1-1 ATS in their last 7 matchups against Wisconsin.  The Buckeyes had the Badgers number back on October 26th, dominating the Badgers to a tune of 38-7.  The Buckeyes have made quick work of their opponents this year, blowing almost all of them out.  Wisconsin has won 4 in a row, since dropping 2 in a row to Ohio State and Illinois.    Ohio State is clearly the better team, but Wisconsin will be more competitive in this one, then their last matchup with Ohio State.  However, being more competitive, doesn't necessarily mean a Badger cover.  The Badgers lost by 31 points last time against Ohio State.  Final score prediction, Ohio State will win and cover, 38-21.