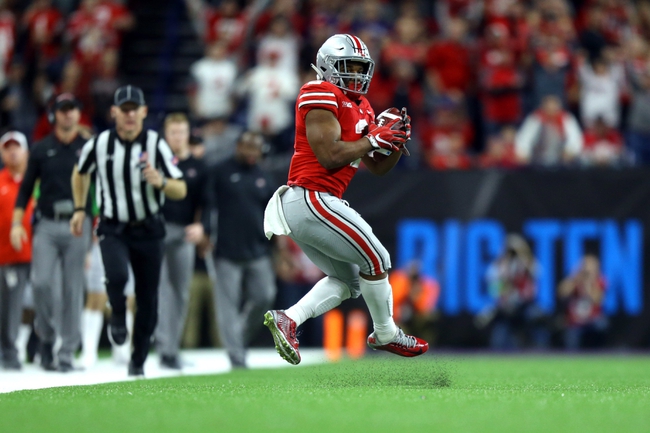 The Florida Atlantic Owls weren’t able to follow up an 11-win season in 2017, but they have Lane Kiffin for a third year and have still won more games the last two years than they did the previous four years combined. The Florida Atlantic Owls have lost five of their last six road games. Florida Atlantic returns seven starters from an offense that averaged 31.1 points and 478.8 yards per game. Chris Robison could become a decent quarterback if he improves his decision making and Harrison Bryant is one of the better tight ends in the country you’ve probably never heard of, as he has over 1,000 receiving yards and nine touchdowns the last two years. Florida Atlantic returns six starters from a defense that allowed 31.8 points and 424.4 yards per game. Linebacker Rashad Smith returns after 86 tackles and four interceptions, while Tim Bonner had three sacks and seven tackles for loss.

The Ohio State Buckeyes have won double-digit games each of the last seven years and will now be led by coach Ryan Day full-time after three games last season. The Ohio State Buckeyes have lost two home games since the start of the 2015 season. Ohio State returns four starters from an offense that averaged 42.4 points and 535.6 yards per game. Justin Fields will takeover at quarterback, a five-star recruit who transferred from Georgia. J.K. Dobbins is coming off 1,000-yard season and 10 touchdowns at running back and K.J. Hill has nearly 1,700 receiving yards and 10 touchdowns the last three years. Ohio State returns nine starters from a defense that allowed 25.5 points and 403.4 yards per game. OSU returns its top-five tacklers from last season, and that doesn’t include one of the top defensive lineman in the country in Chase Young. Jordan Fuller and Malik Harrison combined for 162 tackles and eight passes broken up last season.

The Florida Atlantic Owls can return to being a pretty good offensive team with the returning talent and Kiffin at head coach. The problem is the Ohio State Buckeyes have different type of athletes and the depth is on another level. This is a game where FAU will simply run out of gas and Ohio State is usually the type of team that doesn't take its foot off the gas. Currently living close to the Florida Atlantic campus, I'll be rooting for the road team, but this game likely won't be close at all. The Ohio State Buckeyes set the tone early in their first game with a new coaching staff.