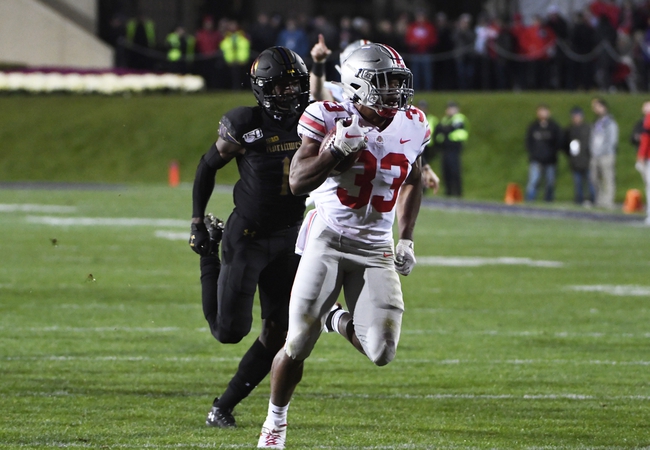 In a game that has somewhat lost its significance after Wisconsin’s loss to Illinois last Saturday, the Badgers will travel to Columbus, Ohio to take on the Buckeyes. Wisconsin’s loss to Illinois was the biggest upset of the year to this point and they will certainly be looking to bounce back. In the game against Illinois, Heisman Trophy hopeful Jonathan Taylor rushed for 132 yards on 28 carries and a touchdown while wide receiver Jake Ferguson caught 5 passes for 77 yards and a touchdown. Quarterback Jack Coan had a good day passing and completed 24 of 32 attempts for 264 yards and a touchdown but a late fourth quarter interception allowed Illinois to regain possession and set up the game winning field goal kick as time expired giving Illinois the 24-23 win.

While Wisconsin comes into Saturday’s game licking their wounds, Ohio State is still on fire after beating Northwestern 52-3 at Ryan Field in Evanston, IL. Quarterback Justin Fields continued to lead the way for the Buckeyes completing 18 of 23 passes for 194 yards with 4 touchdowns and no interceptions. Running back J.K. Dobbins ran for 121 yards and a touchdown on 18 carries and was also a force in the receiving game, catching 3 passes for 30 yards and a touchdown. Backup running back Master Teague III also had a big day out of the backfield running for 96 yards and a touchdown on 7 carries. On the other side of the football the Buckeye defense continued to dominate giving up just 3 points on 199 yards.

Ohio State continues to dominate on both sides of the football while maintaining a perfect 7-0 record on the season. Quarterback Justin Fields has now thrown for 1,492 yards on the season as well as 22 touchdowns against just 1 interception. Running back J.K. Dobbins has been just as unstoppable on the ground running for 947 yards and 7 touchdowns on the year. While the Buckeye offense has been productive on the year, so has the defense who comes into this Saturday’s game giving up just 8 points a game on a average.

My Pick – I have to go with Ohio State in this one. Wisconsin will surely come out hungry after an embarrassing loss to Illinois last Saturday, but the Ohio State offense who averages 49.7 points a game is just too good.  Both defenses will start out well and Ohio State won’t reach their average, but the Buckeyes will break through and be able to put up more points than Wisconsin giving Ohio State a big win in conference play. Ohio State wins 38-28 but does not cover the spread.