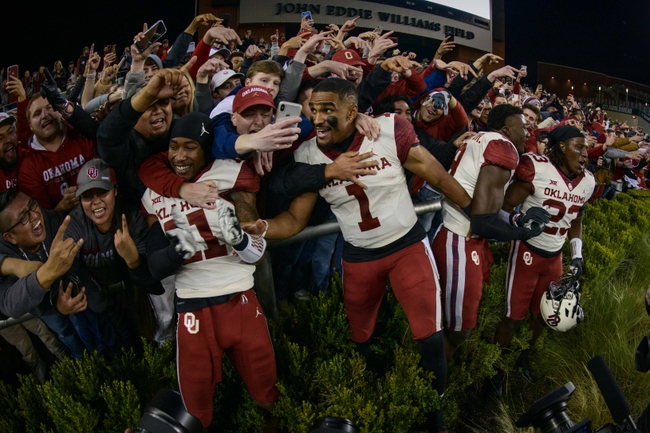 Oklahoma has had quite the roller coaster ride the last couple of weeks after suffering its only loss of the season so far. The Sooners are still in the national playoff picture as they host TCU this week.

Two weeks ago Oklahoma (9-1) gave up 20 fourth-quarter points and stopped a 2-point conversion to preserve a one-point win. Last week the Sooners had the biggest comeback in school history and beat Baylor by three. TCU (5-5) got a last-minute field goal to win its last game, ending a two-game skid.  Four of TCU's losses were by a touchdown or less. The Horned Frogs have one win over a ranked opponent.

For Oklahoma, Jalen Hurts has passed for 3039 yards, 28 touchdowns, and five interceptions. Hurts also leads the team in rushing with 983 yards and 15 touchdowns. Kennedy Brooks has 608 yards rushing and is averaging 7.5 yards per carry. The Sooners were without CeeDee Lamb last week, and he could be out this week as well. He has 983 yards receiving, and his 13 touchdown catches is tied for the national lead. Oklahoma is fifth in the nation in passing yards, 13th in rushing yards and 11th in scoring.

Max Duggan has passed for 1868 yards, 15 touchdowns and seven interceptions for TCU. Darius Anderso has rushed for 785 yards. Jalen Reagor has 545 yards receiving and five touchdowns. TCU is averaging 32.2 points and giving up 26.9.

Oklahoma has won the last five games in this series, and eight of the last nine.

The Sooners are playing some great ball on the year and that will definitely continue in the game here as Hurts is very difficult to stop and has an arm that is just as good. What else helps the Sooners out is the the great defense that ha shown up as well. Compared to the Horned Frogs the offense is producing nicely, but cannot keep pace with the Sooners in this game. Final Score Prediction, Oklahoma Sooners win and cover 38-17.