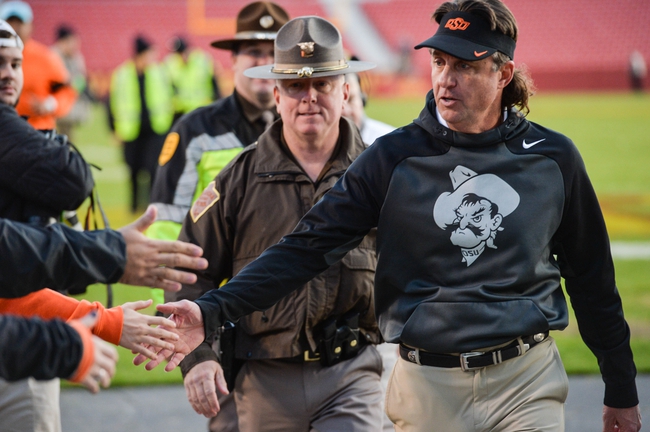 The TCU Horned Frogs come into Saturday’s game against Oklahoma State Cowboys after an upset win on the road against the #15 ranked Texas Longhorns in which TCU won by the score of 37-27.  Freshman quarterback led the way for the Horned Frogs, completing 19 of 27 passes for 273 yards, 2 touchdowns and an interceptions.  Duggan also ran the ball 13 times for 72 yards and a touchdown.  TCU was led in receiving yards by Taye Barber who caught 5 passes for 94 yards.  But the TCU touch down passes were caught by Jaylen Reagor and Pro Wells.  Running back Sewo Olonilua also scored a touchdown while rushing 16 times for 48 yards.  Although TCU came away with the win, the defense struggled allowing 447 total yards including 321 through the air.

On the year, TCU is 4-3 overall and is 2-2 in conference play.  Duggan has thrown for 1,147 yards this season while throwing 11 touchdowns and 1 interception.  Duggan has also ran 62 times for 233 yards and 3 touchdowns.  Darius Anderson has led the Horned Frogs in rushing, carrying the ball 92 times for 615 yards and 6 touchdowns.  TCU’s lead receiver has been Jaylen Reagor who has caught 25 passes for 326 yards and 4 touchdowns so far this season.  Overall, TCU is scoring 34.4 points per game while allowing 25 points per game.

The Oklahoma State Cowboys enter Saturday’s game against TCU after an upset win of their own, beating the #23 ranked Iowa State Cyclones in Iowa by the score of 34-27.  Quarterback Spencer Sanders has a good day under center, completing 16 of 24 passes for 249 yards, 2 touchdowns and an interception while also running 8 times for 43 yards.  The Cowboys lead rusher was Chuba Hubbard who carried the ball 22 times for 116 yards and a touchdown.  Oklahoma State’s lead receiver was Tylan Wallace who caught 8 passes for 131 yards and a touchdown.  Receiver Braydon Johnson also caught a touchdown pass for the Cowboys and caught 3 passes for 66 yards.  On the day, the Cowboys allowed a total of 468 yards, with 382 of those yards coming through the air.

On the year, Oklahoma State is 5-3 but has a 2-3 record in conference play.  Sanders has thrown for 1,739 yards, 13 touchdowns and 10 interceptions.  Hubbard has been the Cowboy’s top rusher, carrying the ball 216 times for 1,381 yards and 16 touchdowns.  The most productive wide receiver has been Tylan Wallace who has 8 touchdowns on the season while catching 53 passes for 903 yards. Oklahoma State is scoring a 37.5 points per game but is also allowing 29.6 points per game.  It’s easy to see that this Cowboy’s team is all about offense.