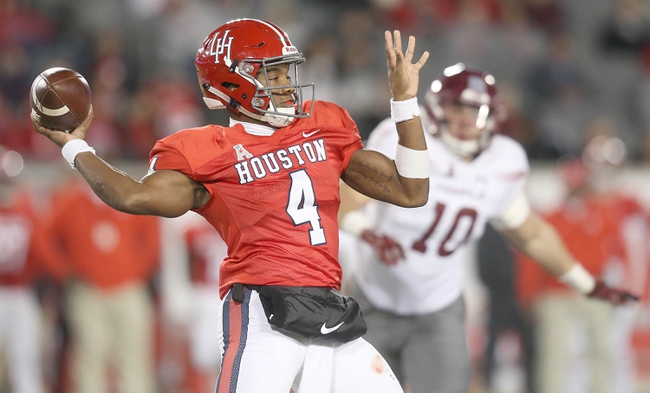 The Houston Cougars and the Oklahoma Sooners meet in a non-conference week 1 college football showdown from Gaylord Family-Oklahoma Memorial Stadium on Sunday.

The Houston Cougars will look to get off to a good start after finishing the 2018 season with an 8-5 overall record, including a 5-3 record in AAC play, finishing as a AAC West Co-champion, but losing out on a spot in the conference championship game due to a tiebreaker loss to Memphis. The Cougars received an invite to the Armed Forces Bowl where Houston were routed by Army, taking a 70-14 loss on the chin, leading the Cougars to fire head coach Major Applewhite and bring in former West Virginia head coach Dana Holgorsen. Houston is hoping that D’Eriq King will be healthy for the season after dealing with injury last season. King was a stud before his injury, throwing for 2,982 yards, 36 touchdowns and just six interceptions on 63.5% passing while also rushing for 674 yards and 14 touchdowns last season. Patrick Carr will join King in the Cougars’ backfield after leading Houston with 868 rushing yards while also contributing 5 touchdowns. Houston’s bringing back one of the more stacked receiving corps to start the year, with Marquez Stevenson back after leading Houston with 75 catches for 1,019 yards and 9 touchdowns and Keith Corbin back for his senior season after logging 40 catches for 691 yards and 10 touchdowns. Defensively it’s a different story, as five of Houston’s top seven tacklers are no longer there, including Ed Oliver who went to the NFL. Nathan Ceaser will be expected to blossom into Houston’s next star linebacker and will have to be part of replacing Austin Robinson and Roman Brown who together combined for 240 tackles and 19.5 TFL last season. As a team, Houston averaged the 7th-most total yardage per game with 512.5 yards of total offense per game along with the 5th-highest scoring offense in the country, scoring 43.9 points per game last season. Defensively, the Cougars allowed 496.8 yards and 37.2 points per game last season.

The Oklahoma Sooners will hope to find the same success in 2019 that they did in 2018, finishing the year with a 12-2 overall record, including an 8-1 record in Big 12 conference play, winning the Big 12 regular season championship and earning a berth in the Big 12 championship game, resulting in a 39-27 win over Texas, getting revenge for their lone loss in the regular season. Oklahoma was one of four teams selected for the college football playoff, where the Sooners were taken down be Alabama in the Orange Bowl by a final score of 45-34. A Sooner quarterback went 1st overall for the 2nd straight year as Kyler Murray departed to the NFL, but the Sooners bring in Alabama transfer Jalen Hurts to take the reins of the Oklahoma offense. Kennedy Brooks and Trey Sermon will be Oklahoma’s 1-2 punch in the backfield after combining for 1,996 yards and 25 touchdowns on the ground last season. Hollywood Brown is gone from Oklahoma’s receiving group, but CeeDee Lamb remains as the team’s top returning receiver after logging 65 catches and a team-high 11 TD grabs. Lee Morris will compliment Lamb while Grant Calcaterra will be expected to once again be one of the country’s top tight ends. Defensively, seven of OU’s eight top tacklers return and nine starters return including leading tackler Kenneth Murray after logging 155 tackles, 12.5 TFL and 4.5 sacks last season. As a team, Oklahoma averaged the highest total yardage in the country last season with 570.4 yards of total offense as well as the nation’s highest scoring offense with 48.4 points per game. Defensively, the Sooners allowed 453.8 yards of total offense and 33.3 points per game last season.

I can understand Oklahoma being a heavy favorite with the way that Houston’s season ended last season, as well as the talent that the Sooners boast on the offensive side of the ball with the likes of Hurts, Sermon, Brooks and Lamb. The Sooners are also the better team defensively of the two. However, Houston is an experienced and highly talented team offensively in their own right and have the ability to go shot for shot with Oklahoma if it comes down to it. Oklahoma has more big game experience, but you have to imagine how pumped Houston will be to take the field in primetime to start their season under the lights and will be raring to go from the opening kickoff. This is going to be a shootout and I’ll want the points in my pocket. This just feels like way too many points to be giving up between these two teams.