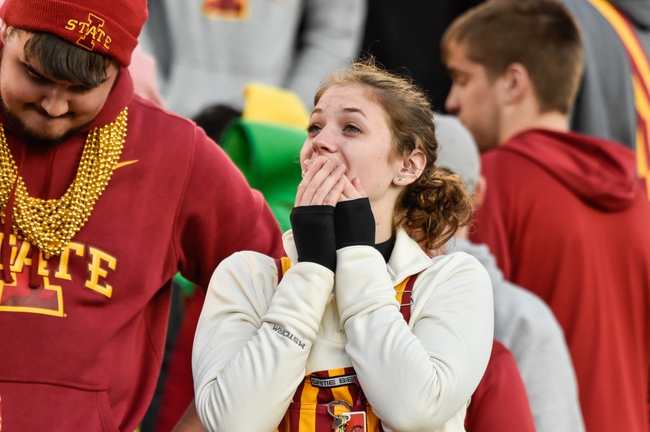 This Big 12 matchup take us to Norman, OK, where the 9th ranked Oklahoma Sooners will play host to the Iowa State Cyclones.  Iowa State enters this road contest with a record of (5-3).  Iowa State saw their 3 game win streak come to an end, losing the last game to Oklahoma State 34-27.  The Sooners enter this home matchup with a record of (7-1).  The Sooners had a bye this week.  Their most recent game was a 48-41 loss at Kansas State.

Iowa State is coming off a much needed bye week after losing the previous week to Oklahoma State.  In the loss to the Cowboys, Cyclones quarterback Brock Purdy attempted 62 passes.  Purdy completed 39 for 382 yds, 1 TD, and 3 INT's.  The game was tied at 27 with less then 7 minutes to go in the 4th quarter.  With 6:47 left, Purdy threw an interception and the Cowboys would return it for a touchdown.  That pick 6 would be the final points scored in the game.  Breece hall added 2 rushing touchdowns for the Cyclones.

In the loss to Kansas State, Oklahoma led after the first quarter 17-7.  Kansas state would slowing establish their offense and kept adding points and eventually led 48-23 early in the 4th quarter.  The Sooners would then mount their attempt of a comeback.  The Sooners scored 18 straight points to cut the deficit to 7 points with 1:45 left in the game, but that would be as close as the Sooners would get.  Jalen Hurts completed 19 of 26 passes for 395 yds and a passing touchdown.  Hurts also added 96 yds rushing and 3 scores in the loss.

Oklahoma is 4-1 ATS in their last 5 home games.

Oklahoma is 5-2 ATS in their last 7 games following a bye week.

The over is 11-2 in Oklahoma's last 13 games following a straight up loss.

Oklahoma has taken care of business in 9 of the last 10 meeting's in this series.  Oklahoma has one of the most potent offense's, while Iowa State has only given up more then 26 points once.   All 3 of Iowa State's losses this season have been by a touchdown or less.  Oklahoma is going to need to bounce back in this home game against a pesky Cyclones team, if the Sooners are wanting to get back in the playoff talk.  Sure Oklahoma will get a good bowl game, but their focus is on a playoff spot.  With Iowa State having lost their 3 games by a touchdown or less, I am going to take Iowa State to cover.  The Cyclones have had respectable losses and were ranked before the loss to Oklahoma State.  Final score prediction, Oklahoma will win and Iowa State covers, 35-24.