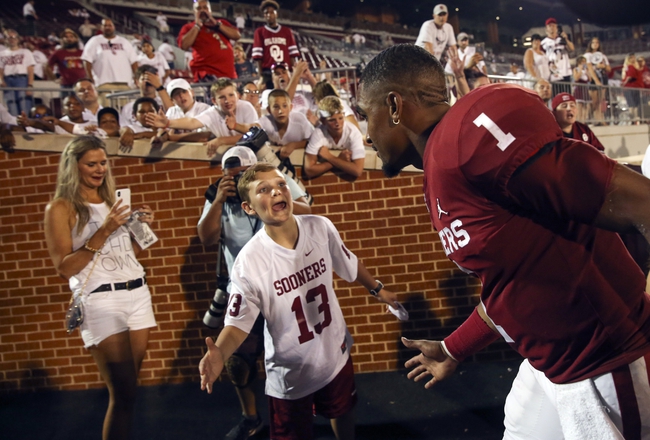 The South Dakota Coyotes and the Oklahoma Sooners will meet up on the college football gridiron Saturday.

South Dakota comes in here at 0-1 on the young season following a 31-17 loss to the Montana Grizzlies in Week 1. The Coyotes were down 17-10 at halftime there and only got one TD the rest of the way.

Austin Simmons tossed for 246 yards, two touchdowns and one INT in Week 1, while Canaan Brooks led the rush on 41 yards. Tops in receiving for the Coyotes was Kody Case with 144 yards and two scores on 11 catches.

Over on the Oklahoma side, they played the Houston Cougars in a Sunday evening matchup Week 1. In that game, the Sooners banged out a 49-31 victory in a game that was probably closer than it should have been.

Meanwhile, the over is 4-0 in the Sooners’ last four versus a team with a losing record and 6-1-1 in their last eight in September. The over is 9-1 in Oklahoma’s last 10 games after posting more than 200 yards rushing in their previous game.

The Coyotes certainly have a few positives to draw from their opening-week loss, specifically some solid performances in the receiving game. There’s still quite a bit of work to do otherwise, however.

Comparatively speaking, South Dakota isn’t anywhere near the Sooners’ level of play, so I’m going to avoid overthinking this and just stick with Oklahoma.