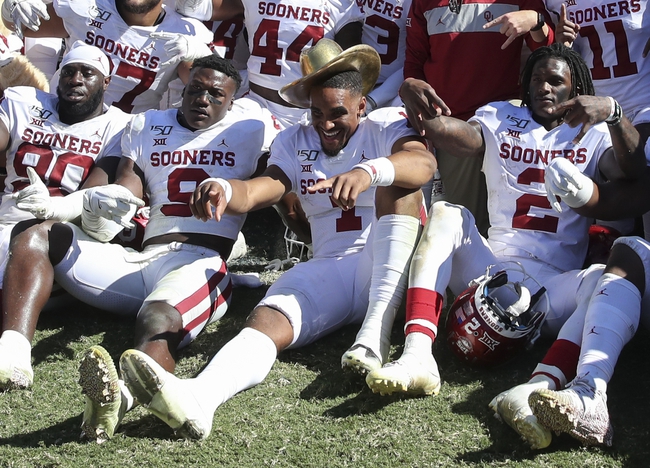 The West Virginia Mountaineers travel to Memorial Stadium for a tough road matchup against the 5th ranked Oklahoma Sooners.  West Virginia enters this contest with a 3-3 record and having dropped 2 straight games.  West Virginia’s last win was back on September 21st, a 29-24 road victory at kansas. The Sooners enter this game with a 6-0 record with 3 of those wins coming in Big 12 play. Most recently the Sooners are coming off a 34-27 win at Texas.

West Virginia on the season has been led by quarterback Austin Kendall who has 1,247 yds and a 9TD/7INT ratio. Kendall is questionable for the game against Oklahoma.  West Virginia has not had much success running the ball this year, as they are averaging 3.1 yards per carry.  Kennedy McKoy leads the rushing attack with 187 yds and 3 touchdowns. Defensively Darius Stills has 4 sacks.

Oklahoma is led by Heisman Trophy candidate dual threat quarterback Jalen Hurts. Hurts on the season is completing over 71% of his passes (98/137) for 1,758 yds and 17 touchdowns.  He also has 630 yds rushing and 8 scores. Sooners receiver CeeDee Lamb has 610 yds on 28 receptions. He has totaled 11 touchdowns this season. Kenneth Murray leads the Sooners defensively with 42 tackles and 2.5 sacks.

If Kendall is held out at quarterback for West Virginia, this game could get ugly quick.  The West Virginia offense had trouble showing up last week against Iowa State.  This is also a team that squeaked out a win against Kansas.  Hurts and company should also be to talented for the Mountaineers defense to keep up with.  If Kendall doesn’t play it hurts their chances even worse. Oklahoma is defeating opponents that aren’t ranked by an average of 34 points per game.  I’m going to take Oklahoma to cover this huge spread at home.  Final score prediction, Oklahoma wins and covers 49-13.