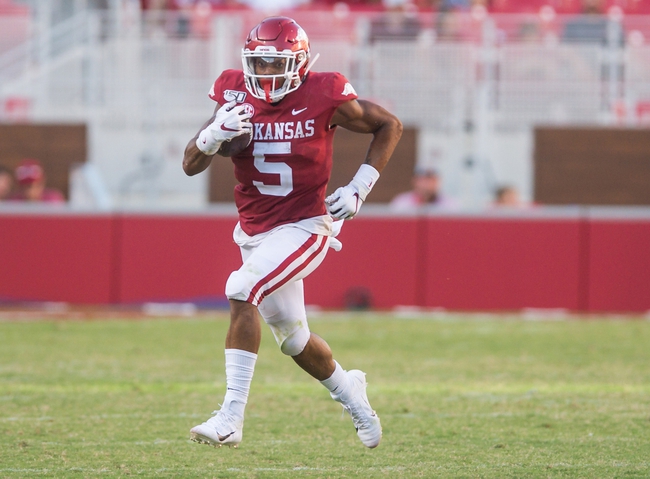 The Arkansas Razorbacks and the Ole Miss Rebels meet in a week 2 SEC conference college football matchup from Vaught-Hemingway Stadium at Hollingsworth Field on Saturday night.

The Arkansas Razorbacks will look to build on a season-opening 20-13 win over Portland State in their last outing. Ben Hicks saw the bulk of the work, going 14 of 29 for 143 yards while Nick Starkel threw for 48 yards and an interception on 4 of 5 passing. Rakeem Boyd led the Hogs with 114 rushing yards and a touchdown on 18 carries while Devwah Whaley added a rushing score of his own. Treylon Burks led Arkansas with 52 receiving yards while Mike Woods added a team-high 5 receptions for 30 yards. Defensively, Arkansas combined for five sacks and three interceptions, including a pair of sacks from both Kamren curl and McTelvin Agim with Curl logging an interception as well.

The Ole Miss Rebels will be looking to bounce back after dropping their season opener last time out with a 15-10 loss on the road to Memphis in their last outing. Matt Corral threw for 93 yards and an interception on 9 of 19 passing while Scottie Phillips rushed for 62 yards and the Rebels’ lone touchdown in the loss. Elijah Moore led the Rebels with 4 receptions for 60 yards as the lone Rebel to log more than two catches and 15 yards in the loss. Defensively, Josiah Coatney had a sack and a team-high 7 tackles while Lakia Henry had 7 tackles of his own and Benito Jones added an interception.

Ole Miss being favored at home makes perfect sense as the Rebels had the much harder season opener of the two but I’m still not overly impressed with how the Rebels struggled on offense in a game that I personally thought was going to be an offensive clinic. Arkansas barely scraped by Portland State, but the Razorbacks still won their opener and have had all of the recent success ATS against Ole Miss, including covering 5 of the last 7 meetings between these two at Vaught-Hemingway Stadium. Sometimes, right or wrong, you have to follow the trends and I think I’m alright with taking a shot on Arkansas with the free touchdown here.