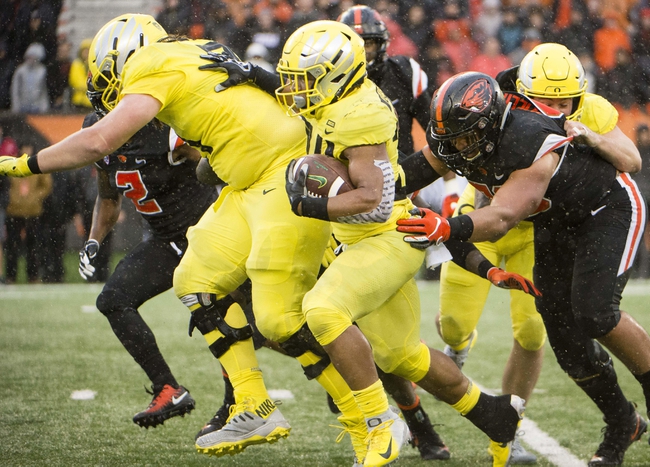 The Oregon State Beavers hit the road for a battle with the 6th ranked Oregon Ducks.  The Beavers are (5-6) thus far, coming off a nail biting 54-53 loss to Washington State.  The Ducks are (9-2), after falling 31-28 to Arizona State.

In the Beavers loss to Washington State, Oregon State was led on offense by quarterback Jake Luton.  Luton completed 22 of 40 for 408 yds, while throwing 5 touchdowns and 1 pick.  Beavers running back Jermar Jefferson added 132 yds rushing on 21 carries and 2 scores.  The Beavers trailed 35-24 going into the 4th quarter and then the scoring out burst started. Oregon State scored 29 of the next 36 points in the 4th quarter to take a 53-42 lead.  Then Oregon State imploded to give up 12 points in the final 2:10 second of the game, to lose by 1 point.

In the Ducks loss to Arizona State, Oregon was guided offensively by receiver Johnny Johnson III.  Johnson hauled in 10 receptions for 207 yds and 2 scores.  Quarterback Justin Herbert was 20 of 36 for 304 yds, while throwing 2 touchdowns and 2 picks.  The Ducks were out gained 535 to 458 in the game.  Oregon finished the game with 2 turnovers, while forcing none, en route to the loss.

Beavers are 4-1 ATS in their last 5 conference games.

Ducks are 4-0 ATS vs a team with a losing record.

Ducks are 5-0 ATS in their last 5 games following a ATS loss.

The over is 4-1 in Ducks last 5 conference games.

The over is 8-0 in the last 8 matchups in this series, win the games are played at Oregon. Both teams have had no trouble scoring points, as well as giving up points at times.  Oregon State will be trying to snag a road win, to make them bowl eligible.  Oregon's chances of being 1 of the 4 teams in the playoffs were taken away, in the loss to Arizona State.  One may wonder where the Ducks heads are?  This should be a high scoring game, as the trends would agree.  Expect a lot of possessions, as there should be some quick drives in this game.  Final score prediction, Oregon wins and the total goes over, 42-27.