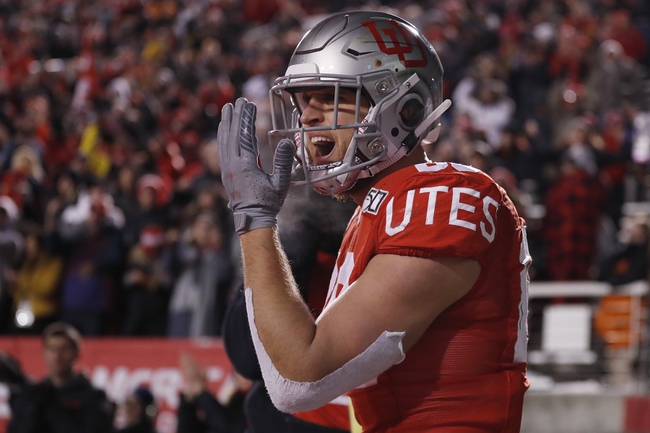 The #6 Utah Utes head to Santa Clara, California on Friday for the PAC-12 Championship Game against the #14 Oregon Ducks.  In their last game, Utah defeated the University of Colorado by the score of 45-15.  Utah quarterback Tyler Huntley completed 14 of 17 passes for 165 yards and 2 touchdowns on the day and also ran 10 times for 27 yards.  Running back Zack Moss carried the ball 20 times for 88 yards and a touchdown on the day. Wide receiver Brant Kuithe was the most productive Utah wide out on the day as he caught 3 passes for 63 yards and also ran for a touchdown.  Utah’s defense played well against Colorado, allowing total of 217 yards in the game, but just 60 on the ground.

With the win, Utah finished their regular season 11-1 overall and 8-1 in conference play, winning the PAC-12 South Division.  On the year, Utah quarterback Tyler Huntley has thrown for 2,773 yards and 16 touchdowns against just 2 interceptions.  Moss has been the lead rusher for the Utes as he has carried the ball 200 times for 1,246 yards and 15 touchdowns on the year.  Brant Kuithe has been the lead receiver on the year for Utah as he has caught 29 passes for 550 yards and 6 touchdowns on the season.

The Oregon Ducks head into the PAC-12 Championship game after beating Oregon State in their last game by the score of 24-10.  Justin Herbert led the Ducks to the win under center as he completed 18 of 30 passes for 174 yards and a touchdown while also rushing 4 times for 22 yards.  Travis Dye was the lead rusher for Oregon and carried the ball 12 times for 91 yards on the day.  Wide receiver Johnny Johnson III was the Ducks’ leading receiver on the day as he caught 4 passes for 39 yards and a touchdown. The Oregon defense gave up 380 yards on the day with 137 yards coming on the ground.

After the win, Oregon finished the regular season 10-2 with a conference record of 8-1 and won the PAC-12 North Division.  Justin Herbert continues to add to his NFL draft status as he has thrown for 3,140 yards and 31 touchdowns against 5 interceptions on the year.  Running back C.J. Verdell has been Oregon’s leading rusher so far this year as he has ran for 963 yards and 5 touchdowns on 162 carries on the year.  The lead receiver for the Ducks’ has been Johnny Johnson III who has caught 49 passes for 731 yards and 6 touchdowns on the year.