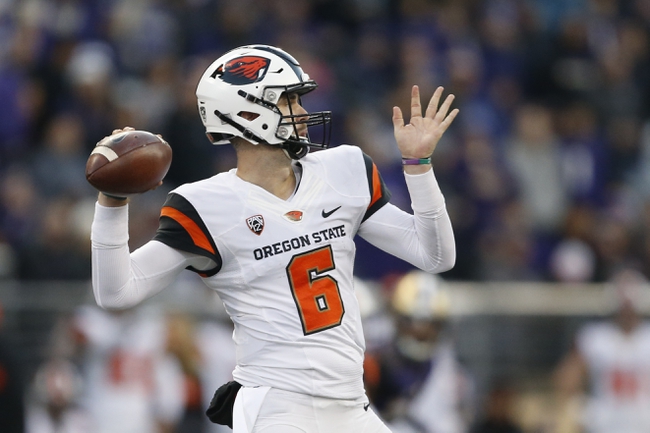 The Oklahoma State Cowboys and the Oregon State Beavers meet in a week 1 non-conference college football matchup from Reser Stadium on Friday night.

The Oklahoma State Cowboys come into the 2019 season looking to rebound after a down year in 2018, failing to hit double-digit wins for the first time since 2014 after finishing with a 7-6 record, including 3-6 in Big 12 conference play to in a three-way tie for 7th, but finishing the year with a 4-1 record against teams in the top 25. The Cowboys got an invite to the Liberty Bowl, a game that saw the Cowboys defeat Missouri by a final score of 38-33. Dru Brown is expected to take over the starting QB duties for the Cowboys after transferring in from Hawaii, but he’ll have competition for the job with redshirt freshman Spencer Sanders joining the fray as well as true freshman Brendan Costello. Justice Hill is gone from the OK State backfield, but Chuba Hubbard will step in right away after finishing 2nd on the team with 740 rushing yards and 7 ground scores last season. Leading receiver Tylan Wallace is back to head Oklahoma State’s receiving group after logging 86 receptions for 1,491 receiving yards and 12 touchdowns last season. Dillon Stoner will be expected to step in as a #2 receiver in the Cowboys offense while Landon Wolf has the potential to be a big threat in the slot. Defensively, Oklahoma State will be undergoing a ton of turnover after losing their entire D-line and a big part of their linebacking corps which included two of their top three tacklers. Calvin Bundage is back after registering 62 tackles last season while the secondary features the likes of AJ Green and Rodarius Williams with both Green and Williams registering 49 tackles and combining for three interceptions last season. As a team, Oklahoma State averaged 499.4 yards of total offense and 38.4 points per game while allowing 452.8 yards and 32.5 points per game last season.

The Oregon State Beavers will look to rebound from a brutal 2018 season that saw the Beavers finish the year with a 2-10 overall record, including a 1-8 mark in Pac-12 conference play, finishing at the bottom of the Pac-12 North division. Jake Luton will be back after throwing for 1,660 yards, 10 touchdowns and 4 interceptions on 62.5% passing last season, but will have some competition for the starting QB job with Nebraska transfer Tristan Gebbia coming in to compete. Jermar Jefferson and Artavis Pierce will form a formidable 1-2 punch out of the Oregon State backfield with Jefferson leading the Beavers with 1,380 yards and 12 touchdowns while Pierce averaged 7.6 yards per carry last season. 11 of Oregon State’s top 12 receivers from last season return, including Isaiah Hodgins who led the Beavers with 59 receptions and 876 yards as well as 5 receiving TDs last season and Trevon Bradford is back after logging 56 grabs for 649 yards and a team-high 6 TDs last year. Defensively, the top ten tacklers and eight starters are back, but returning from a defense that was one of the worst in the country last season. Hamilcar Rashed and Shamar Smith will anchor Oregon State’s linebacking group with Smith logging 85 tackles last season while Rashed had 12.5 TFL. Jalen Moore is back at safety after leading OSU with 101 tackles last season. As a team, Oregon State averaged 404.8 yards of total offense and 26.1 points per game while allowing 536.9 yards and 45.7 points per game last season.

Oklahoma State is and should probably be favored here given how both teams seasons ended last year, especially with how the porous Oregon State defense performed all season. However, Oklahoma State’s defense is going to be pretty much overhauled and may take some time to gel while Oregon State, as bad as the defense was, bring almost the entire staff back and have experience playing together. The Beavers also have some talent offensively, and with the solid running back tandem of Jefferson and Pierce, the Beavers can chew some clock. I’m just not a fan of laying this many points on the road with there being so many question marks are Oklahoma State right now, so I’ll take a shot with Oregon State and the points at home in this one.