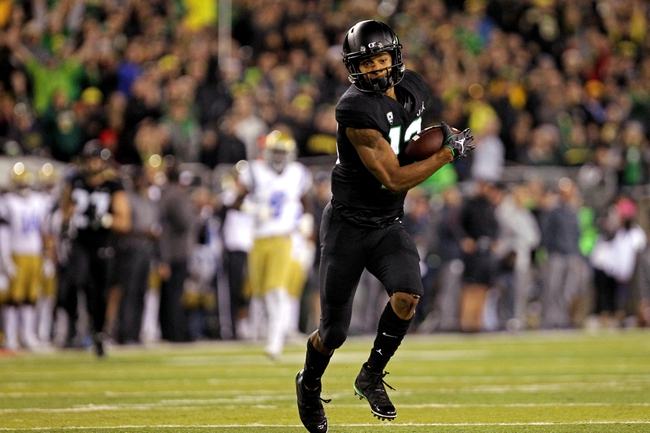 The Arizona Wildcats head to Eugene, Oregon on Saturday for a game against the #7 Oregon Ducks.  In their last game, the Wildcats were defeated by the Oregon State Beavers by the score of 56-38.  Arizona quarterback Grant Gunnell completed 19 of 29 passes on the day for 269 yards and 2 touchdowns.  Arizona’s other quarterback Khalil Tate also saw time under center as he completed 7 of 12 passes for 109 yards.  Running back J.J. Taylor led the Wildcats on the ground, rushing 21 times for 78 yards and 2 touchdowns.  Taylor was also Arizona’s lead receiver on the day as he caught 7 passes for 89 yards in the game.  The Wildcats defense was nonexistent on the day as they gave up a total of 572 yards to the Beavers offense.

With the loss, Arizona is now 4-5 on the season and have a conference record of 2-4, which puts them in 5th place in the Pac 12 South.  The loss for Arizona was also their 4th loss in a row.  On the year, Gunnell has thrown for 1,061 yards, 9 touchdowns and 1 interceptions.  Although Gunnell has played well after taking over for Tate, Tate is the Wildcats leading passer as he has thrown for 1,637 yards and 12 touchdowns against 8 interceptions.  Taylor has been Arizona’s lead rusher on the year as he has ran for 566 yards and 5 touchdowns on the year while carrying the ball 107 times.  The lead receiver for the Wildcats has been Jamarye Joiner as he has caught 24 passes for 366 yards and 3 touchdowns on the season.

The Oregon Ducks are riding high as they welcome the Arizona Wildcats to their campus for a game on Saturday.  In their last game, the Ducks beat the USC Trojans by the score of 56-24 in a game played at USC.  Justin Herbert led the Ducks to the win under center as he completed 21 of 26 passes for 225 yards, 3 touchdowns and 1 interception while also rushing for a touchdown.  Travis Dye was the lead rusher for Oregon and carried the ball 12 times for 75 yards on the day.  Wide receiver Juwan Johnson was the Ducks’ leading receiver on the day as he caught 7 passes for 106 yards and 3 touchdowns. The Oregon defense gave up 355 yards on the day but just 91 yards on the ground.

After the win, Oregon has now won 8 games in a row and are 8-1 on the season as well as 6-0 in conference play which puts them in 1st place in the Pac 12 North as well at 7th in the nation.  Justin Herbert continues to add to his NFL draft status as he has thrown for 2,329 yards and 24 touchdowns against just 2 interceptions on the year.  Running back C.J. Verdell has been Oregon’s leading rusher so far this year as he has ran for 765 yards and 5 touchdowns on 118 carries on the year.  The lead receiver for the Ducks’ has been their tight end as Jacob Breeland has caught 26 passes for 405 yards and 6 touchdowns on the year.