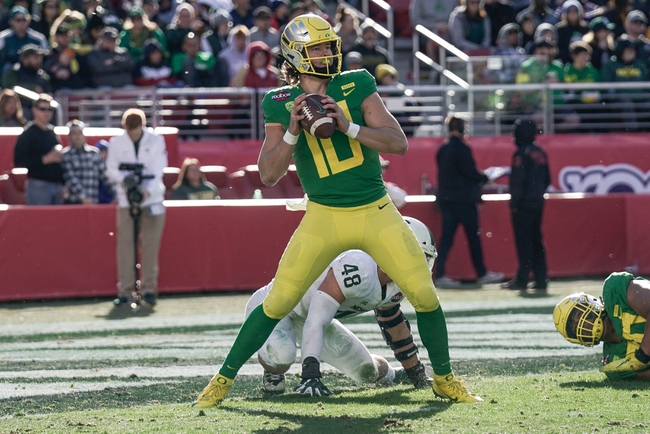 The Auburn Tigers come into the 2019 season looking to bounce back from what they’d probably consider a down year after finishing with an 8-5 overall record, including 3-5 in SEC conference play, finishing 5th out of 7 in the SEC West division. The Tigers got an invite to the Music City Bowl where they routed Purdue with a 63-14 victory. Jarrett Stidham is now a New England Patriot, but the Tigers will rely on highly-touted recruit Bo Nix to step right in under center for Auburn and if the dual-threat Nix can’t produce, the Tigers also have Joey Gatewood waiting in the wings and it’s entirely possible that both see playing time in Gus Malzahn’s offense. Auburn also boasts one of the better running back tandems in the SEC with JaTarvious Whitlow and Kam Martin combining for 1,245 yards and 7 scores last season. The top two receivers from Auburn are also gone but there’s a young receiving group with plenty of depth to help keep Auburn competitive. Defensively, the Tigers boast a scary front four, led by defensive tackle Derrick Brown while the secondary also retains four of the five starters from last season. The drawback is that Auburn has to replace their linebacking group with three starting linebackers gone. As a team, Auburn averaged 389.9 yards of total offense and 30.9 points per game while allowing 356 yards and 19.2 points per game last season.

The Oregon Ducks will look to build on a strong 2018 season, finishing the year with a 9-4 overall record, including a 5-4 mark in Pac-12 conference play, finishing in 4th in the Pac-12 North division. The Ducks were invited to the Redbox Bowl, a defensive battle that Oregon won 7-6 on a late touchdown. Justin Herbert is back at QB after throwing for 3,151 yards, 29 touchdowns and 8 interceptions on 59.4% passing last season. CJ Verdell and Travis Dye are back as the 1-2 punch in the Oregon backfield after combining for 1,757 yards and 14 touchdowns last season. Dillon Mitchell is gone after leading the Ducks in receiving with the next leading receiver in Jaylon Redd logging just over half of the output that Mitchell had. The good news is that Redd is back and is expected to produce in a bigger role for Oregon this season. Oregon also brought in Juwan Johnson from Penn State after Johnson logged 32 receptions for 389 yards last season. Defensively, the Ducks got a major shot up front landing #1 overall prospect Kayvon Thibodeaux while Mase Funa and Keyon Ware-Hudson also looking to make an impact in the near future. Troy Dye is back at linebacker after far and away leading the Ducks with 109 tackles last season Deommodore Lenoir and Thomas Graham are back at corner for a Ducks secondary that logged 17 inteceptions last season, including five of which went to sophomore Jevon Holland who returns as well as Nick Pickett who had 59 tackles last season. As a team, Oregon averaged 428.7 yards of total offense and 34.8 points per game while allowing 388.3 yards and 25.4 points per game last season.

Auburn is and probably should be favored as they’re the more experienced defensive team and this game is in Texas so it’s a shorter trek for the Tigers. However, there are still question marks all over the Tigers at key positions like QB and linebacker and while the guys filling those spots may be talented, there’s still a lot of relative unknown there. Oregon is as talented offensively at QB as it gets with Herbert who would probably have been a top-5 pick if he went to this year’s NFL draft. The Ducks also match up well enough and can hang with Auburn and if the Ducks want to be the team to beat in the Pac-12, a win here would be a huge push in that direction so I’ll take a shot with Oregon and the points in a game I personally see the Ducks winning outright.