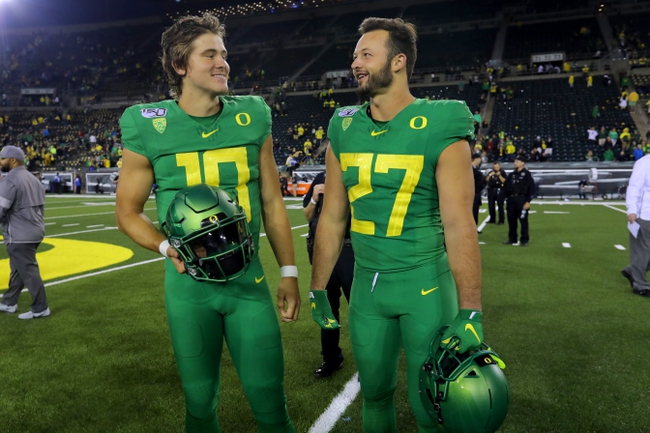 The Oregon Ducks look to get a game above a .500 record after waxing Nevada last week. The Oregon Ducks have won their last four home games. Justin Herbert is completing 74.6 percent of his passes for 552 yards, six touchdowns and zero interceptions. Herbert has one touchdown pass in three of his last four games. Johnny Johnson III and Jacob Breeland have combined for 285 receiving yards and one touchdown while Jaylon Redd has 11 receptions. The Oregon Ducks ground game is averaging 155.5 yards per contest, and CJ Verdell leads the way with 136 yards and two touchdowns. Defensively, Oregon is allowing 16.5 points and 287.5 yards per game. Troy Dye leads the Oregon Ducks with 19 tackles, Mase Funa has two sacks and Thomas Graham Jr. has one interception.

I'll make this quick and say I'm siding with the over in this contest. We've seen far too often how the Oregon Ducks treat lesser competition at home, whether it was Nevada last week, dropping 62 points on Portland State last year or scoring 77 points against Southern Utah in the 2017 season opener. The Oregon Ducks have the offensive firepower to beat the snot out teams that don't have quality defensive players to counter the speed, and they're certainly not shy keeping their foot on the gas. The Oregon Ducks will get us close to this total by themselves, so I feel comfortable siding with the over and leaving the massive chalk alone.