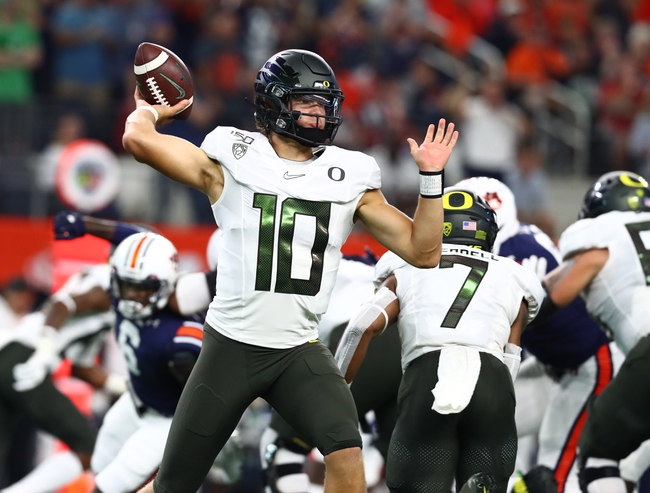 The Nevada Wolf Pack look for another victory after beating Purdue last week as double-digit underdogs. The Nevada Wolf Pack have won three of their last four road games. Carson Strong is completing 58.8 percent of his passes for 295 yards, three touchdowns and zero interceptions. Strong threw the ball 51 times in the upset victory. Toa Taua and Elijah Cooks have combined for 124 receiving yards and two touchdowns while Kaleb Fossum has six receptions. The Nevada Wolf Pack ground game is averaging 109 yards per contest, and Taua leads the way with 56 yards and one touchdown. Defensively, Nevada is allowing 31 points and 519 yards per game. Tyson Williams leads the Nevada Wolf Pack with 12 tackles, Dom Peterson has one sack and Daniel Brown has two interceptions.

The Oregon Ducks look for a bounce back performance after a heartbreaking loss to Auburn. The Oregon Ducks have won six of their last seven home games. Justin Herbert is completing 75.7 percent of his passes for 242 yards, one touchdown and zero interceptions. Herbert has one touchdown pass in his last three games. Johnny Johnson III and Jaylon Redd have combined for 162 receiving yards on 16 catches while Spencer Webb has three receptions. The Oregon Ducks ground game is averaging 90 yards per contest, and CJ Verdell leads the way with 76 yards and one touchdown. Defensively, Oregon is allowing 27 points and 383 yards per game. Troy Dye leads the Oregon Ducks with 15 tackles, Sampson Niu has one sack and Thomas Graham Jr. has one interception.

The Nevada Wolf Pack won last week as 11-point underdogs, their first win as a double-digit underdog since 2014 when beating BYU. The Oregon Ducks have split their last 10 games ATS as a double-digit favorite. This game feels like a bad spot for the road team, as Nevada could be in for a letdown after such a dramatic victory, while Oregon certainly has a bad taste in its mouth and will be eager for a bounce back showing. While the Nevada Wolf Pack have enough talent to put up a decent performance, this is a game where Oregon should keep its foot on the gas and possibly run away with things in the second half. The spot for this game is why I lean toward the Ducks in a comfortable victory.