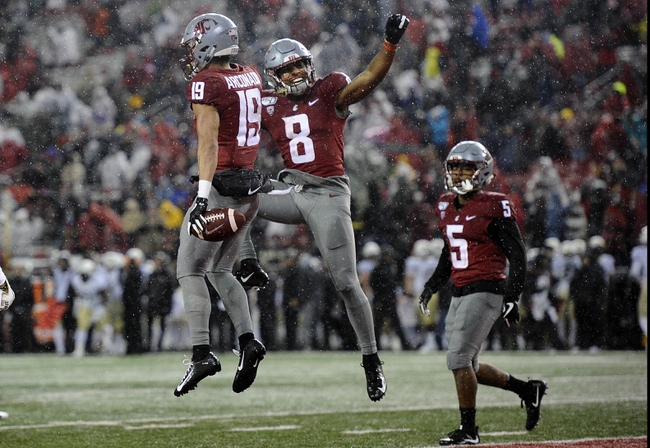 The Washington State Cougars visit Autzen Stadium in Eugene, Oregon on Saturday for a Pac-12 showdown with the No. 12 ranked Oregon Ducks. The Cougars routed the Colorado Buffaloes on Saturday 41-10 snapping a three-game losing streak. Anthony Gordon threw for 369 yards with four touchdowns. Gordon completed 35 of his 51 passes and completed passes to eight different receivers. The Cougars defense limited the Buffaloes to 320 total yards of offense.

Oregon rallied behind the arm of Justin Herbert to beat Washington 35-31 Saturday night. Herbert connected with Jaylon Redd with 5:10 remaining in the game on a 5-yards touchdown pass to give the Ducks a lead they would not relinquish. Herbert threw for four touchdowns in the win. Oregon is 6-1 overall and 4-0 in Pac-12 play leading the North division by two games.

Washington State is 1-5 ATS in its last 6

The UNDER has cashed in 8 of the Cougars’ last 12

The UNDER has cashed in 8 of the Ducks last 10

While both programs are known for well-above average offenses, the play here is UNDER. The UNDER has cashed in 8 of Oregon’s last 12 and in 5 of the Ducks last 6 versus a Pac-12 opponent. Oregon is allowing just 11.9 points per game and that was lower before Washington scored 31 on the Ducks on Saturday. Final Score Prediction, Oregon Ducks win, but our best play is UNDER 31-27