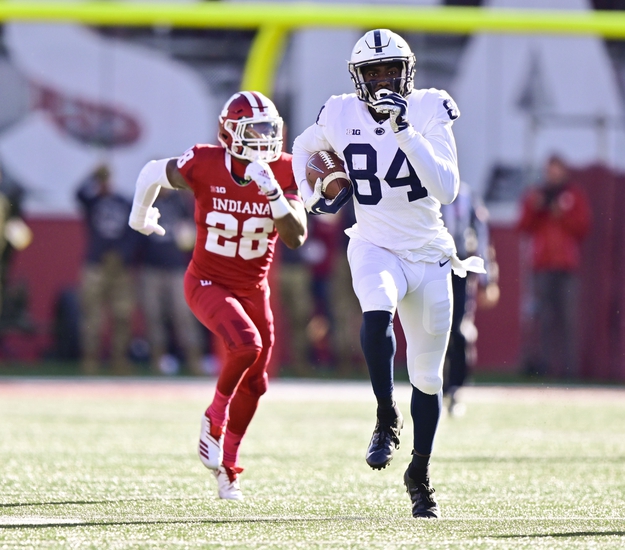 The Indiana Hoosiers travel to University Park for a matchup with the top 25 ranked Penn State Nittany Lions.  The Hoosiers are (7-2) on the season and have won 4 in a row.  Indiana most recently beat the Northwestern Wildcats, 34-3.  The Nittany Lions are (8-1) and are coming off a tough loss to the Minnesota Golden Gophers, 31-26.

In the win over the Wildcats, the Hoosiers were led by Stevie Scott III, with 116 yds rushing on 26 carries and 2 touchdowns.  Indiana kicker Logan Justus made both of his field goals, with a long of 30 yds.  The Hoosiers out gained the Wildcats 414 to 199 in the game.  The Hoosiers came up big defensively, forcing 3 turnovers.  Indiana did not commit any turnovers en route to the victory.

Penn State quarterback Sean Clifford was 23 of 43 for 340 yds, while throwing 1 touchdown and being intercepted 3 times.  The Nittany lions were paced offensively by running back Journey Brown.  Brown rushed for 124 yds on 14 carries and 2 touchdowns.  The turnovers hurt the Nittany Lions in the game, giving the ball away 3 times in what ended up to be a one score game.  Penn State had more total yds offensively then Minnesota in the loss, 518 to 460.

Hoosiers are 5-1 ATS in their last 6 games overall.

The under is 5-2 in Nittany Lions last 7 games overall.

The Hoosiers have had a nice stretch of play recently, winning their last 4 games.  During those 4 games, Indiana's toughest opponent was Nebraska.  Penn State on the other hand has had a brutal stretch over the last 4 games. The Nittany Lions have gone 3-1 in those 4 but have played the likes of: Minnesota, Michigan State, Michigan, and Iowa. Indiana's 2 losses this here have to Michigan State and Ohio State, both ranked opponents at the time.  Indiana has a nice record but Penn State should win and cover this spread.  Final score prediction, Penn State will win and cover, 35-17.