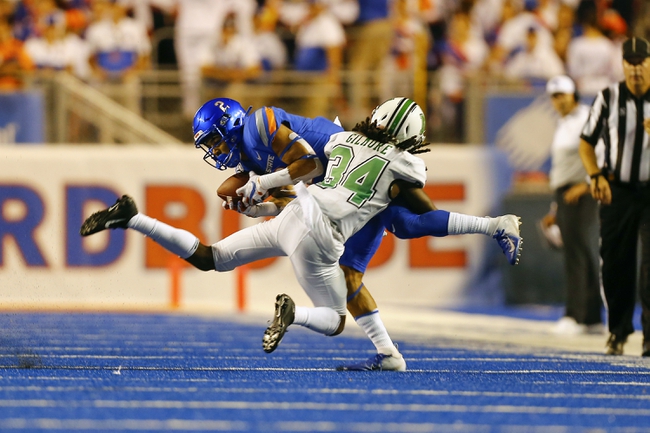 The Marshall Thundering Herd head into Houston, TX for a battle with the Rice Owls on Saturday after a big win against Western Kentucky last week.  Kicker Justin Rohrwasser kicked a 53 yard field goal as time expired to give the Thundering Herd the win, 26-23.  Quarterback Isaiah Green had a decent day throwing the ball, completing 20 of 31 passes for 230 yards and a touchdown.  Green also ran 7 times for 12 yards and a touchdown. Wide receiver Broc Thompson recorded 3 catches for 91 yards and Armani Levias caught 10 passes for 77 yards and a touchdown.  Running back Brenden Knox ran the ball 19 times for 84 yards and was Marshall’s leading rusher.  The Marshall defense allowed 401 total yards in the game, but it was just enough to beat Western Kentucky.

On the year, Marshall is 5-3 and 3-1 in conference play.  Isaiah Green has now thrown for 1,607 yards, 11 touchdowns and 6 interceptions.  Brendan Knox has been a force on the ground with 137 carries for 803 yards and 7 touchdowns.  Armani Levias has been the most productive wide receiver and has 32 receptions for 346 yards and 3 touchdowns on the season.  Marshall has scored 27 points per game this season and is giving up 26.1 points per game.

Rice welcomes Marshall to their campus after losing their last game 20-6 to Southern Miss in a game where Rice’s only points of the game didn’t come until the 3rd quarter.  Quarterback Wiley Green completed just 12 of 26 passes for 104 yards, a touchdown and an interception and was simply shut down by the Southern Miss defense the whole game.  Sophomore quarterback Evan Marshman also saw action in the game, but didn’t do much better than Green.  Marshman completed 2 of his 5 passes attempts for 27 yards.  Running back Charlie Booker was also never able to get started as he carried the ball 10 times for just 28 yards.  Green’s touchdown pass was caught by wide out Austin Trammell who led Rice in receiving on the game making 5 catches for 52 yards and a touchdown.  If there is a silver lining to this game for Rice, it is the fact that their defense wasn’t terrible.  Although Southern Miss gained 364 yards, holding them to 20 points can be considered an accomplishment since they are averaging just over 29 points a game on the season.

With the loss, Rice drops to 0-8 overall and 0-4 in conference play.  To make matters worse, the Thundering Herd come into town playing some of their best football of the year.  On the year quarterback Wiley Green has thrown for 787 yards, 4 touchdowns and 2 interceptions. Rice’s leading rusher on the year is Aston Walter, who has ran 110 times for 504 yards and 5 touchdowns, however, he is listed as doubtful for the game on Saturday. Austin Trammell is Rice’s is leading receiver as he has caught 42 passes for 524 yards and 2 touchdowns. Coming into Saturday's game Rice has scored an average of 15.9 points per game while allowing 29.1 points per game.

For my pick in this game, I have to go with Marshall and unfortunately for Rice, that means they will remain winless on the year.  The Rice offense simply isn’t good enough and will be taken down by the Thundering Herd defense.  Although Marshall is averaging giving up 389 yards per game this season, Rice only averages 277.9 per game so it will be a big opportunity for Marshall to bring that number down. Marshall wins this one 35-14 and covers the spread.