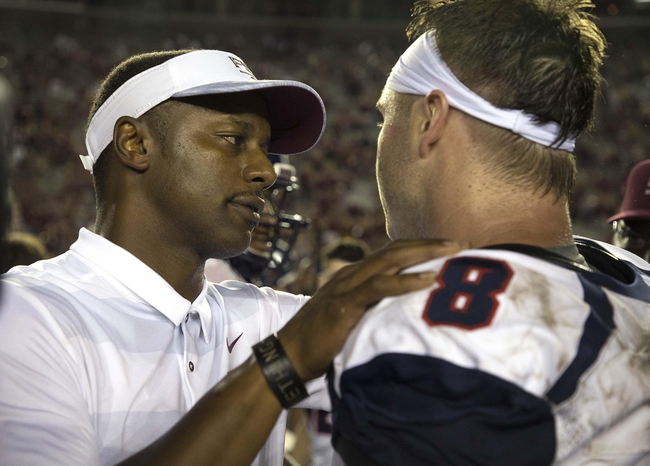 The Youngstown State Penguins have had their win total decrease each of the last three years and enter a fifth season under coach Bo Pelini. The Youngstown State Penguins have lost eight of their last 10 road games. Nathan Mays should takeover at quarterback after 44 pass attempts last season, and he’ll have the teams top-three receivers by his side in Christian Turner, Samuel St. Surin and Jermiah Braswell. Replacing playmaker and a 1,000-yard rusher in Tevin McCaster certainly won’t be easy, but Youngstown State has enough experience on this side of the ball to be effective out of the gate. Defensively, Youngstown State loses its top-two tacklers, but the Penguins do Shereif Bynum, who had 11.5 tackles for loss and cornerback Bryce Gibson, who had 12 pass deflections. Senior defensive back DJ Smalls returns after six pass deflections last year and Wesley Thompson could have a breakout season on the defensive line after showing flashes as a sophomore.

The Samford Bulldogs are coming off a six-win season that ended with them winning five of their last six games. The Samford Bulldogs have won nine of their last 11 home games. Samford will look quite different this season with the loss of quarterback Devlin Hodges, defensive lineman Ahmad Gooden and wide receiver KJ McKnight, three All Americans and arguably the best trio in the schools history. The good news is the Bulldogs return their leading rusher in DeMarcus Ware, who had seven touchdowns on 87 carries and a pair of receivers in Chris Shelling and Jai'Rus Creamer combined for 12 of Samford’s 34 receiving touchdowns. Samford just needs to find a quarterback to balance out this offense. Defensively, Samford says goodbye to its top-two tacklers from last year, but Tre'Shun Floyd returns after 47 tackles and 1.5 sacks, while Nelson Jordan had five sacks and pass deflection. Samford’s secondary also gets big boost with Koi Freeman returning from injury.

The Youngstown State Penguins have been horrible on the road these last two seasons, and while this isn't a true home game for Samford, it's pretty much a home game with it taking place in Alabama. When looking at the rosters, Samford may have lost a lot of big names, but it still has playmakers on offense and a reliable running back who should have an even bigger season with more of a workload. The Youngstown State Penguins are a bit raw offensively at this stage and lost their workhorse in the backfield. This could be a defensive battle, and I'd have to give the edge to the Samford Bulldogs with the talent they have up front and some key secondary players returning. I'll take a stab with the points.

The pick in this article is the opinion of the writer, not a Sports Chat Place site consensus.
Previous Pick
Colgate vs. Villanova - 8/24/19 College Football Pick, Odds, and Prediction
Next Pick
Saskatchewan Roughriders vs. Ottawa Redblacks CFL Pick, Odds, Prediction - 8/24/19